Unlike other Palestinian prisoners who went on a hunger strike for a few days or weeks, Allan, a lawyer by profession and Islamic Jihad activist seems determined not to give up and go all the way. 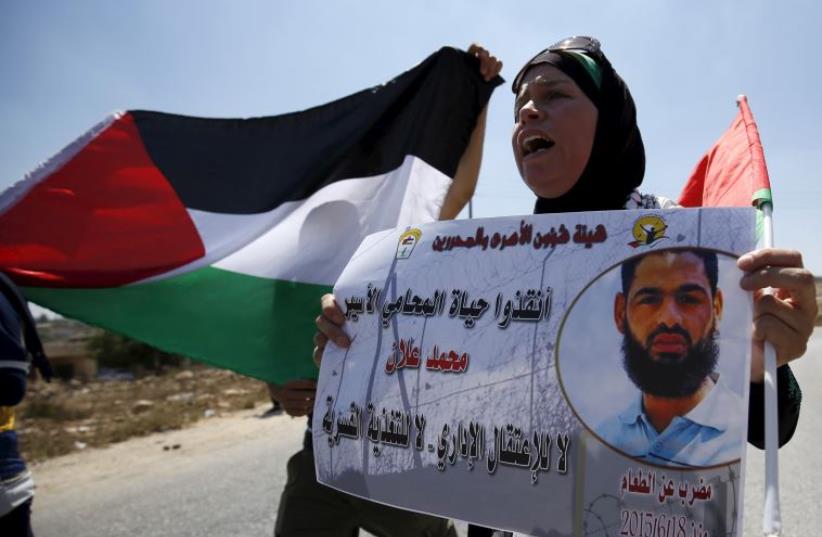 A Palestinian woman holds a picture depicting Palestinian detainee Mohammed Allan during a protest in solidarity with Allan in the West Bank village of Nabi Saleh
(photo credit: REUTERS)
Advertisement
The surprise proposal submitted by the state Monday at the last moment to the High Court of Justice in the case of Palestinian detainee Muhammad Allan – whose hunger strike enters its 63rd day – indicates how seriously Israel is concerned about the ramifications if he dies.The Shin Bet (Israel Security Agency) and IDF proposed that Allan, who is hospitalized at Ashkelon’s Barzilai Medical Center, be released in exchange for his self-imposed exile abroad for four years. The offer was reached after consultations with the prime minister and defense minister, who approved it.Unlike other Palestinian prisoners who went on a hunger strike for a few days or weeks, Allan, a lawyer by profession and an activist with the radical Islamic Jihad, who has served prison time for terrorism, seems determined not to give up and go all the way – either to defeat the state or to his bitter end.His hunger strike caught Israel between the hammer and the anvil. The security establishment fears that if Allan wins a precedent will be set. There are 5,600 Palestinian convicts in Israeli prisons, most of them sentenced to long terms. Some 340 of them, including Allan, are held under administrative detention.This means that the state has the right to lock up a suspect without a trial for between six months to three years and even more. Administrative detention is a legal but undemocratic measure. In a democracy everyone is innocent until proven otherwise.And of course a democracy has the right to defend itself. Israel is not alone. Other democratic nations, such as the US, use similar methods – see Guantanamo, where al-Qaida suspects in terrorism are held without trial. Nevertheless, it must be a last resort and used very selectively.Israel’s security establishment worries that Allan’s death will trigger uncontrollable demonstrations, which may lead to a general escalation. The West Bank is already like a firebomb wait - ing to be ignited. Any minor incident might get out of hand and set off a conflagration. The situation is ripe for it. The number of terrorist incidents – including stabbing soldiers at checkpoints – is on the rise.The Palestinian leadership is desperate because of the lack of any step, even a minor one, in the direction of peace negotiations, yet blames the intransigence of Prime Minister Benjamin Netanyahu. It is entangled in a bitter power struggle behind the scenes over who will replace Mahmoud Abbas.Israel already has tried all its tools to force Allan to surrender. It refused to release him. It passed a law to enable forced feeding. It tried to circumvent the refusal of the Israeli Medical Association to obey the law by transferring Allan to a friendly hospital, whose director showed signs of readiness to help the government. Yet all has been in vain.The new proposal is more than reasonable. It is a face saver for all involved parties, especially Israel, but also the Palestinian Authority, which is not interested in escalation, and of course to the prisoner himself.Past precedents from Britain – the 1909-1914 Suffragette hunger strikes and the IRA prisoners hunger strikes in the early 1980s – ended with a compromise and not a knockout to one of the sides. One can hope that Allan’s case will also end in a similar way.