The conference released a statement that nobody paid attention to, and five days later US President Donald Trump was inaugurated into office. 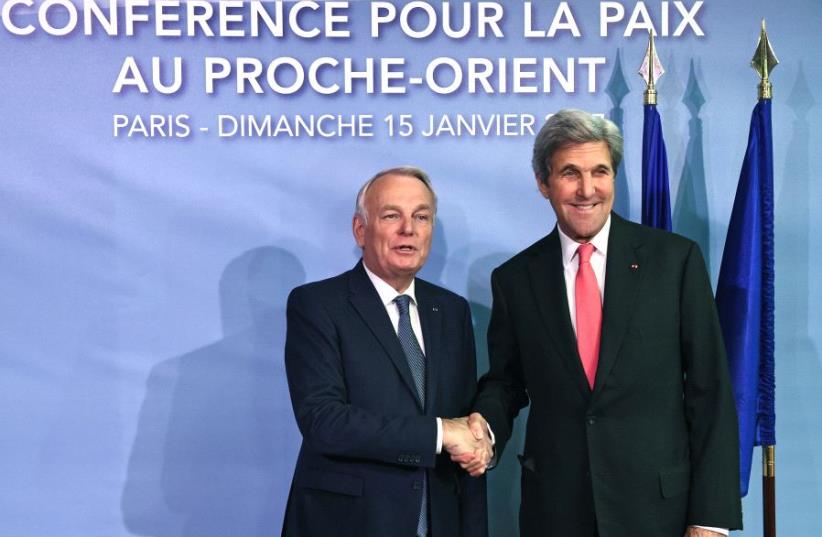 French Minister of Foreign Affairs Jean-Marc Ayrault welcomes US Secretary of State John Kerry as he arrives for the Mideast peace conference in Paris, France, January 15, 2017
(photo credit: REUTERS)
Advertisement
It was an august ceremony that signified absolutely nothing, the Middle East Peace Conference held in Paris just six months ago.Representatives from some 70 countries, including the foreign ministers from 30 of them – along with outgoing US secretary of state John Kerry – took part in the parley on January 15.The event caused no small degree of prior consternation in Jerusalem, concerned it might produce some final statement that would set the parameters for peace which, in the very final gasp of Barack Obama’s presidency, would be adopted and codified into a resolution by the UN Security Council.So much energy expended on nothing.The conference released a statement that nobody paid attention to, and five days later US President Donald Trump was inaugurated into office.Many of the heroes of the 2017 Paris summit are no longer on the scene: French president Francois Hollande, gone; French foreign minister Jean-Marc Ayrault, gone; Kerry, gone.Gone too, at least for the time being, is an obsessive European and French focus on the Israeli-Palestinian diplomatic process, on the settlements.In fact, months have gone by now without the monthly meeting of European foreign ministers issuing statements about the peace process, often in an unbalanced way to place the onus for the diplomatic stalemate on Israel’s shoulders. Who remembers the last time EU foreign policy chief Federica Mogherini was mentioned in an Israeli news report? One hears much less of late about the European Union or individual European countries considering sanctions against Israel for continued settlement construction.Sure, they perfunctorily issue condemnatory statements following any news of new settlement building.But the matter generally stops there.Granted, French President Emmanuel Macron raised the Palestinian issue and – unlike either Indian President Narendra Modi or Trump when they were in Jerusalem during the last two months – pledged allegiance to a two-state solution with east Jerusalem as a joint capital, during a press conference with Prime Minister Benjamin Netanyahu in Paris on Sunday.He also made a point of criticizing the settlements, something neither Trump nor Modi did publicly. But it was not done with the same passion one has come to expect from the French on these matters.Why not? Why is this not as hot a topic for the French and for other Europeans as it was just a mere half-year ago? There are a number of reasons.The first has to do with Trump replacing Obama. During the Obama years, Obama did not shy away from public spats or from using megaphone diplomacy to castigate Israel.This took the fetters off some Europeans who figured that if the US was slamming Israel – and they are Israel’s greatest ally – then they surely had the green light to do so as well.Another reason has to do with Europe. Frankly, the EU has a lot more pressing issues to deal with, from keeping the union together following Brexit, to dealing with significant internal rifts among the 28 countries, to dealing with a massive refugee crisis, to fighting terrorists.While the EU has always had its own internal crises to deal with, they usual came as single spies, not in battalions, as is the case now.The EU is currently not only dealing with Brexit, or only dealing with the residue of the financial crisis, or only dealing with the refugee crisis, or only dealing with terrorism – they are dealing with it all together, and that takes a toll. That means the Israeli-Palestinian issue is not as high a priority – even for the Europeans – as it once was.Further, there is a tendency for many of the EU countries to want to have close bilateral ties with Israel, so there is less of a reflex to link their ties with Israel to progress on the Palestinian issue or a halt to settlement construction. This can best be illustrated by looking at Belgium – not necessarily viewed as one of Israel’s best friends in Europe – in fact, a country that has traditionally been very critical of Israel.In just over a year, the Belgian prime minister has visited Israel, as has the foreign minister, finance minister, and the interior minister – on two occasions – to get a sense of how Israel deals with the terrorist threats that Belgium is now facing. And Belgium is not alone.Macron, too, said at the press conference that he wanted to reinforce what he called France’s “longstanding links” with Israel, and was dispatching his economy minister to Israel to “extend those links.”As a result of the terrorist attacks in France, Israel is also more valuable for Paris, not only because it wants to cooperate with Israel’s vibrant “ecosystem,” as Macron put it, but also to cooperate with Israel in the fight against terrorism And this, despite the fact that Jerusalem has not taken the steps that France would like to see it take to move the diplomatic process forward.None of that means that France, or the EU, are not highly critical of Israel’s policies. It is just that Europe and France right now have a more pressing need to simply get their own homes in order.And they actually realize it.