Analysis: Why Palestinian attacks have shifted from Jerusalem to West Bank

Ever since the attacks have shifted to Judea and Samaria, security forces say there has been an overall drop in the violence. 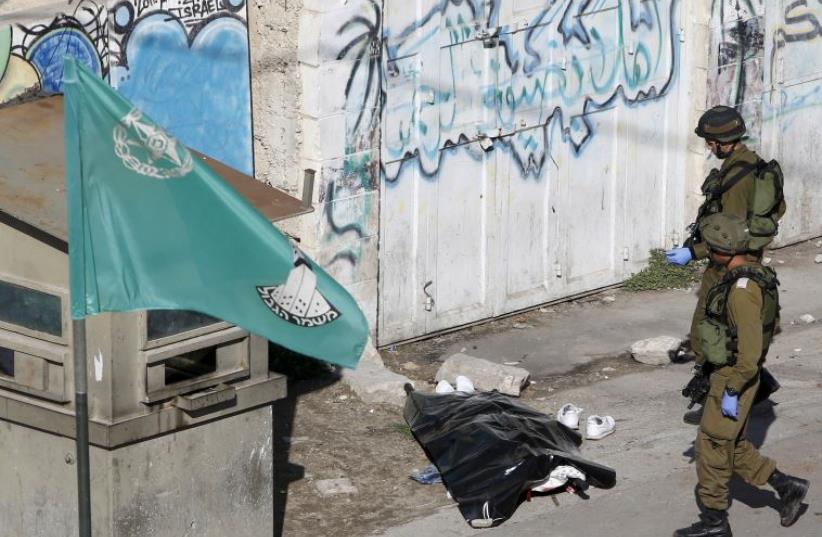 Israeli soldiers stand next to the body of a Palestinian who moments earlier stabbed a soldier in Hebron
(photo credit: REUTERS)
Advertisement
The epicenter of the wave of Palestinian terrorism has shifted in recent days from the eastern neighborhoods of Jerusalem to Judea and Samaria.According to diplomatic sources, Palestinian Authority President Mahmoud Abbas issued a directive 10 days ago to halt all attacks in Jerusalem and instead place the focus on Judea and Samaria, with a special emphasis on the Gush Etzion and Hebron areas.Israeli officials say that the attacks committed against Israeli civilians and passersby generated fierce international criticism. By concentrating their efforts in targeting soldiers in Judea and Samaria, the Palestinians believe that they could soften the blow of global public opinion.Ever since the attacks have shifted to Judea and Samaria, security forces say there has been an overall drop in the violence. It appears that Israel has a much easier time dealing with knife-based terrorism aimed at soldiers than it does stopping attacks in the alleys of Jerusalem.The sharp decrease in the number of attacks could be attributed mostly to the tighter security cooperation between the Israel Security Agency (Shin Bet), the IDF, and the elite units of both the army and the police in the Judea and Samaria theater. The dragnet and wave of arrests carried out in the last week is the most extensive since Operation Brother's Keeper, the code-name for the effort to track down the three kidnapped teenagers.In the last week, over 200 wanted Palestinians have been arrested throughout the West Bank. The security forces have been active in detaining Palestinians from various villages, towns, and refugee camps. Of those arrested, 53 belong to the Islamist Hamas movement.An overwhelming majority of those arrested were involved in various activities including stone-throwing, the hurling of Molotov cocktails, rolling burning tires at security forces, and using makeshift bombs and grenades. IDF officers say that the suspects brought into the interrogation rooms acknowledge their part in the rioting, with some even saying that they planned attacks.The considerable chasm between the security forces' ability to thwart attacks in the eastern parts of Jerusalem and attacks in the West Bank proves once again the extent to which the Palestinian Authority controls the Israeli Arabs of the capital, many of whom are now heeding the new directives. Conversely, this gap reflects just how little control the security forces have over the eastern parts of Jerusalem as it relates to intelligence and the thwarting of terror attacks.