MK Ahmad Tibi: "Instead of showing understanding for the needs of Arab communities, they are ramping things up for demolitions. It is horrible and it creates friction and anger." 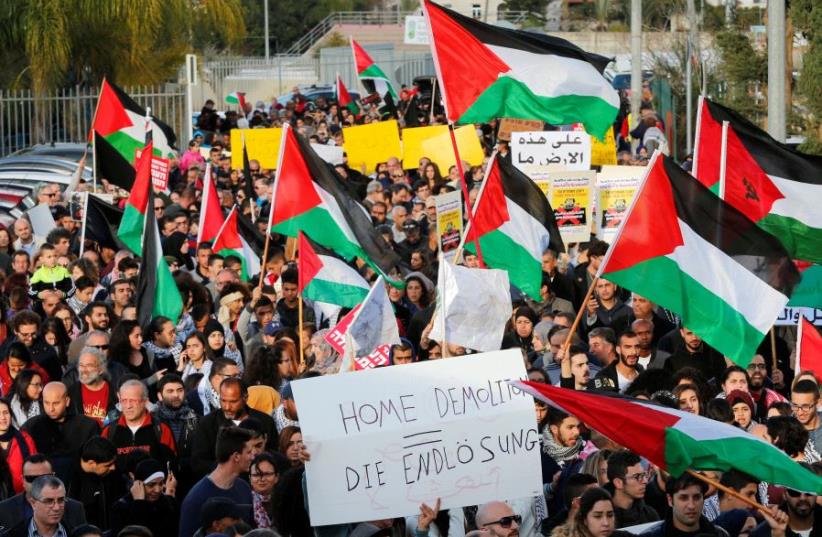 Arab Israeli protesters hold a Palestinian flag during a protest in the northern Arab Israeli village of Arara
(photo credit: REUTERS)
Advertisement
About 200 demonstrators from Arab locales throughout Israel held an emotionally charged protest outside the Finance Ministry on Tuesday against home demolitions, as legislators nearby in the Knesset discussed a proposal that would increase enforcement and penalties for illegal construction.“I came so that they will not abuse the Arab population,” said Ashraf Abu Ali, a repairman from Kalansuwa in Central Israel, where in December 11 houses at various stages of construction were demolished for being built without permits.“All the time more demolition orders are being affixed to homes,” he said, adding that his own house is slated for demolition in July.Kalansuwa residents say they cannot obtain permits to build on their own land because planning authorities have failed to increase the area zoned for building in the town, instead leaving land zoned for agricultural use only. “They haven’t expanded the building area and the population has grown, so people are forced to build without permits,” Abu Ali said.The frustration and anger of being in that bind was palpable as protesters held signs saying “Stop the Home Demolitions, No to Expulsions,” “Don’t Destroy my House, It is my Right to Live with Honor” and “Housing Instead of Destruction.”Border Police briefly jostled with several of several demonstrators as they pressed closer to the gate at the ministry.There were shouts of “police state” and “Kahlon resign, we don’t want you anymore,” a jab at Finance Minister Moshe Kahlon.Ibrahim Badawiya, 51, a political activist from Ramle said: “What they give for Jews they don’t give for Arabs. People are angry because there are no solutions to build legally.”The situation may get even worse, from the Arab perspective.An amendment to the planning and building law discussed in the Knesset Interior Committee on Tuesday aims to further toughen policies against illegal construction. It would restrict the discretion of courts over enforcement of construction violations and expand the powers of administrative entities – especially those concerned with national planning and planning enforcement – to deal with construction without a permit. It would also increase fines and prison terms for building offenses.The explanatory notes for the amendment, which was drafted by Deputy Attorney-General Erez Kaminitz, speaks of the need to create a deterrent against rampant illegal building.The pro-settler Regavim NGO backs the amendment, likening illegal building to a national plague that needs to be brought under control.“These are very harsh measures targeting our community,” said MK Yousef Jabareen (Joint List). “I’m very worried about the next few weeks and months. All of these measures are being imposed without the needed master plans to enable legal building.”MK Ahmad Tibi (Joint List) added: “Instead of showing understanding for the needs of Arab communities, they are ramping things up for demolitions. It is horrible and it creates friction and anger.”Matani Ihab, a driver from Kalansuwa, said: “We are not a people of criminals. We respect the law, but the government doesn’t help us. They don’t give permits.”Ihab, whose year-and-a-half-old house is ordered for demolition next month, added: “We hope the government will bring us a better solution than demolition, a solution in which all the citizens can live in peace and quiet. They should make sure people can build in Kalansuwa and throughout the Arab sector from north to south.”