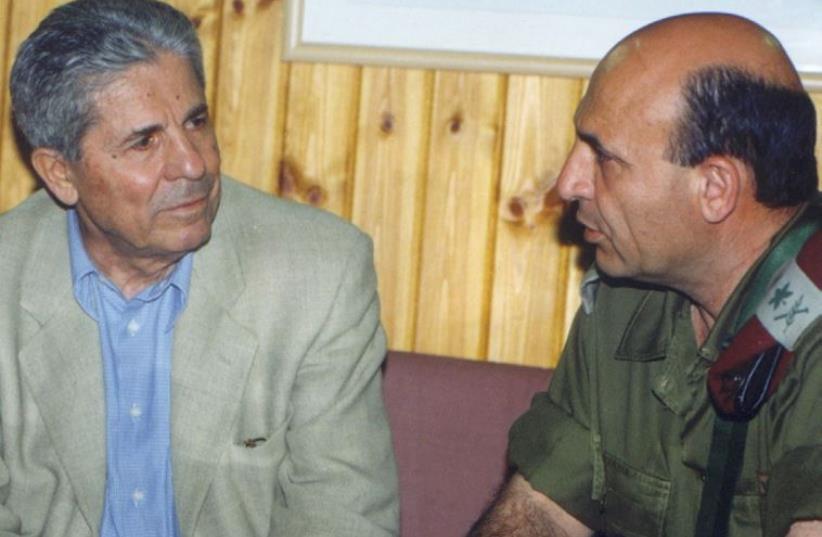 GEN. ANTOINE LAHAD speaks with then-chief of staff Lt.-Gen. Shaul Mofaz after the IDF withdrawal from Lebanon in 2000
(photo credit: REUTERS)
Advertisement
The life of Lebanese Gen. Antoine Lahad, who died in Paris a few days ago at the age of 88, was full of paradoxes.He considered himself a Lebanese patriot but cooperated with the enemy and was sentenced by a Lebanese court to death in absentia. He was a military man but had politician skills. He was kind and had good manners but could be rude and cruel.He was born in 1927 in a village in the Chouf Mountains to a Maronite Catholic family. At age 25 he graduated from the Lebanese Military Academy and began his career as a professional officer close to the family of president Camille Chamoun.To understand Gen. Lahad one has to understand the Lebanese Civil War that started in 1975 as clashes erupted between Maronite forces and Palestinians backed by leftist, pan-Arabist and Muslim Lebanese groups. The war created strange bedfellows.The Alawite president of Syria, Hafez Assad, and his army supported a coalition of Christians, Shi’ites and Druse who were fighting the Lebanese Sunnis and all the Palestinian factions. However, during the course of the fighting, alliances shifted rapidly and unpredictably, making it hard to differentiate between friend and foe.While the civil war was still raging, the Israel intelligence services and military intervened in Lebanese matters by supplying weapons to the Christian forces, reaching a tacit understanding with Assad and helping to establish a local militia later known as the South Lebanese Army, led by Maj. Saad Haddad.In 1982, Israel invaded Lebanon.The declared aim was to smash the PLO and stop the rocket shelling of the Galilee. But the government led by prime minister Menachem Begin and defense minister Ariel Sharon had a secret agenda: to install Phalange party head Bashir Gemayel, a Maronite Catholic, as president of Lebanon, to expel Palestinians and to make peace between the two countries. It didn’t work (Gemayel was assassinated in September of that year) and Israeli troops sank deeper and deeper in the Lebanese mud.During the civil war, Gen. Lahad was appointed by the divided, disintegrated and defunct Lebanese Army as its nominal commander for the South. Following the death of Maj. Haddad in 1984, Lahad also took control of the South Lebanese Army.He restructured the SLA by forming new regiments of Druse, Shi’ites and Christians and by using his political contacts and skills in ensuring support of religious, military and political leaders in Beirut.It helped him to ensure that Lebanese Army soldiers abandoned in the south were once again paid their salaries, and to build three major hospitals in the region.The rise of the Iranian-created and backed Hezbollah movement ensured, however, that Lahad’s success in stabilizing the south was short lived. As Hezbollah attacks against IDF and SLA troops increased daily, Lahad’s dreams of uniting the south with the north became slimmer and slimmer. He and the SLA had to rely more and more on the Israeli security forces.Symbolically, an Israeli flag flanked by two flags of Lebanon flew over his headquarters in Marjayoun, 6 km. from Metulla just over the Israel border, which also housed a broadcast center of American evangelical reverend Pat Robertson’s Christian Broadcasting Network.Hezbollah sentenced Lahad to death and plotted to kill him, almost succeeding in November 1988.Souha Bechara, a 21-year-old woman who was raised in the Eastern Orthodox Church and joined the Communist Party, tried to assassinate him. She shot him twice in the chest but he survived.Lahad’s bodyguards detained the assassin, but in a mysterious twist whose circumstances are still not clear, he pardoned her.After a few weeks in Haifa’s Rambam Medical Center, he resumed his military duties, but he never fully recovered from his injuries. In the last years before the IDF withdrew from south Lebanon in 2000, he was losing whatever influence he still had with Israel. Then-Prime minister and defense minister Ehud Barak imposed his will on the IDF command and decided to on a full withdrawal from Lebanese soil, without consulting or even informing the SLA commander.Gen. Lahad never hid his belief that Israel and especially Barak betrayed him and his troops who had to escape to Israel like thieves in the night. Still he was determined, or at least pretended he was, to carry on the fight against Hezbollah. He pleaded for financial and logistical support from Israel, and to keep the border open. Barak declined.Heartbroken, Lahad tried his luck in Israel by opening a restaurant in Tel Aviv. But soon the business failed and was closed. Once France lifted its objection, he settled in Paris where his family lived.After Lahad died on Thursday, his former comrades from the SLA issued a statement saying: “Antoine was a proud Lebanese national, loyal to his homeland, Lebanon, and his heart was filled with love for it and its unique character, a love that moved him to take upon himself the enormous responsibility over the border area in south Lebanon.He had two main goals - providing security to the people of south Lebanon and pushing for peace between Lebanon and the State of Israel.”Former GOC Northern Command Maj.-Gen. (res.) Yossi Peled, who knew him well, said, “General Lahad was a Lebanese patriot. The State of Israel owes him a tremendous moral debt due to his years-long contribution to the security of the residents of south Lebanon and northern Israel.”But for the Lebanese government, nowadays controlled by Hezbollah, he was a traitor. A Lebanese court in 2014 sentenced him in absentia to death. Though Lahad found the decision insulting, he told a former senior Israeli security official that nothing could compare to the humiliation and treachery he suffered at the hands of Barak.