The settlement was confirmed on Friday by Michael Elsner, a lawyer for the plaintiffs, and a spokesman for Arab Bank. The terms were not disclosed. 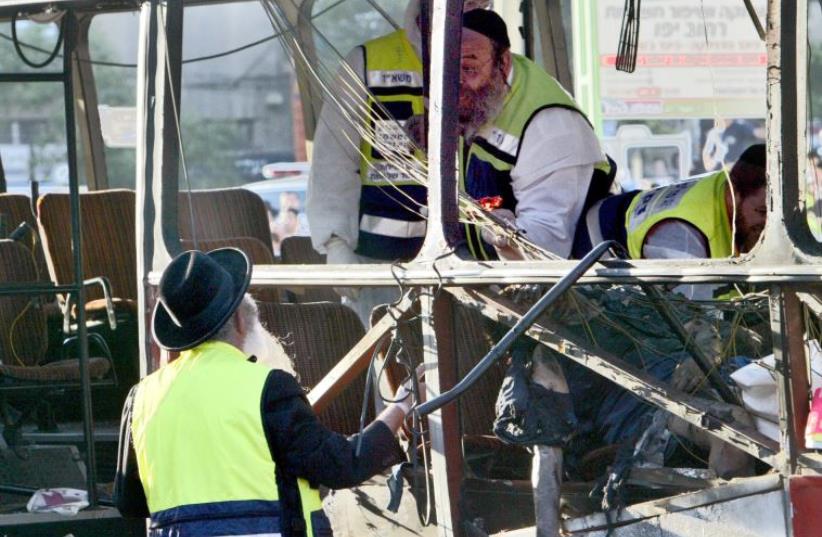 Israeli rescue workers search a bus destroyed by a suspected Palestinian suicide bomber in Jerusalem, June 11, 2003
(photo credit: REUTERS)
Advertisement
Jordan’s Arab Bank settled a case with hundreds of plaintiffs that could be worth billions of dollars, ending the most dramatic terrorism finance case against a major bank in US history.The settlement was confirmed Friday by Michael Elsner, a lawyer for the plaintiffs, and a spokesman for Arab Bank. Terms were not disclosed.It comes nearly a year after the US New York jury found the $46 billion bank liable; four months after the bank lost a shot at a retrial; days before a damages trial was set to start; and 14 years after some of the terrorist attacks in question took place.The highly public trial lasted five weeks and revisited some of Hamas’s worst attacks, including the August 2001 Sbarro suicide bombing in Jerusalem that killed or wounded 130, and a range of 24 other terrorist attacks during the second intifada.A total of 297 plaintiffs who were injured or are family members of those murdered in the attacks that took place from 1998-2004, which were financed via Saudi Arabia and Hezbollah’s al-Shahid Foundation, sued the bank in 2004 for allowing itself to be used as a conduit for the terrorism funds.The 10-year history of intense legal battles, included trying to get the bank’s “secret” client documents located in Jordan, Lebanon and Palestinian areas.The US Supreme Court already had weighed in once pretrial and could have been asked to weigh in again post-trial, while the US State, Justice and Treasury departments fought over whether the US government should accede to Jordan’s requests to intervene in the case.Jordan had claimed that Arab Bank, by far the country’s largest, was so crucial to the country’s economy that a multi-billion dollar judgment could lead to economic and political instability and devastation, possibly damaging crucial US-Jordan counter-terrorism cooperation.Commentators, meanwhile, had said that if Arab Bank was held liable for being a conduit for funds that eventually reached terrorists, the precedent could shake the international banking system to its foundations as many other major banks also may have dabbled in such transactions.However, sources have in the past told The Jerusalem Post that the plaintiffs would not likely settle for less than a massive claims award befitting the decade-long litigation and the number of dead and injured involved since they already had won the trial.The September 2014 verdict covered 310 plaintiffs, who claimed Arab Bank knowingly maintained accounts for Hamas operatives and facilitated payments for families of suicide bombers and those imprisoned or injured during the intifada.A trial had been scheduled to start Monday to begin determining how much the bank would have to pay the victims and their families.The framework of the deal would be finalized over the next few months, Elsner said.A source familiar with the litigation said it would include claims brought under the Anti-Terrorism Act by 500 plaintiffs, some of which had been dismissed.

Frank G. Runyeon contributed to this report.
Advertisement
Subscribe for our daily newsletter