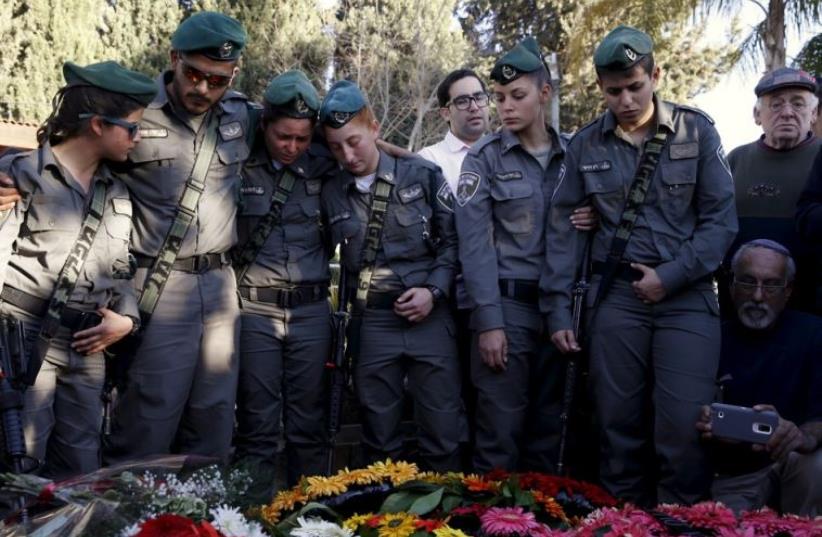 Comrades of Border Policewoman Hadar Cohen mourn during her funeral in Yehud
(photo credit: REUTERS)
Advertisement
An Arab taxi driver from east Jerusalem was indicted for negligent homicide on Sunday in the murder of Border Police Cpl. Hadar Cohen.The officer, 19, was killed in February outside the Old City’s Damascus Gate by three terrorists who illegally entered the capital from Jenin.A fellow female Border Police officer was seriously wounded in the February 3 attack carried out by the West Bank assailants, who wielded machine guns, pipe bombs and knives before being shot dead by security forces.The three suspects, identified as Ahmed Rajeh Zakarneh, Muhammad Ahmed Kmail and Ahmed Najeh Abu al-Rub, all entered Jerusalem illegally from the town of Kabatiya, where their homes were subsequently razed.The driver, Hamees Salaimeh, 57, of Wadi Joz, is being charged by the Jerusalem District Court with complicity in Cohen’s death for transporting the killers.According to the indictment, Salaimeh agreed to pick up the three men, who breached a security fence in a-Ram, near Ramallah, using rope.He then charged the suspects NIS 150 to drive them to an undisclosed mosque in east Jerusalem’s Isawiya neighborhood, waited briefly, and then proceeded to drive them to the crime scene.When Cohen and her unidentified colleague identified the men as terrorists and approached them, they were brutally attacked with knives and gun shots, the indictment states.Police bomb disposal experts were called to the scene to detonate two pipe bombs used by the attackers.Noting that Salaimeh should have been aware that he was transporting terrorists, the prosecution initially intended to charge him with aiding and abetting a murder, but agreed on the reduced charge of negligent homicide.The indictment further claimed Salaimeh continued to provide driving services to Palestinians who did not possess Israeli residency permits.