Arab home demolitions in east Jerusalem spike in first half of 2016, claims report 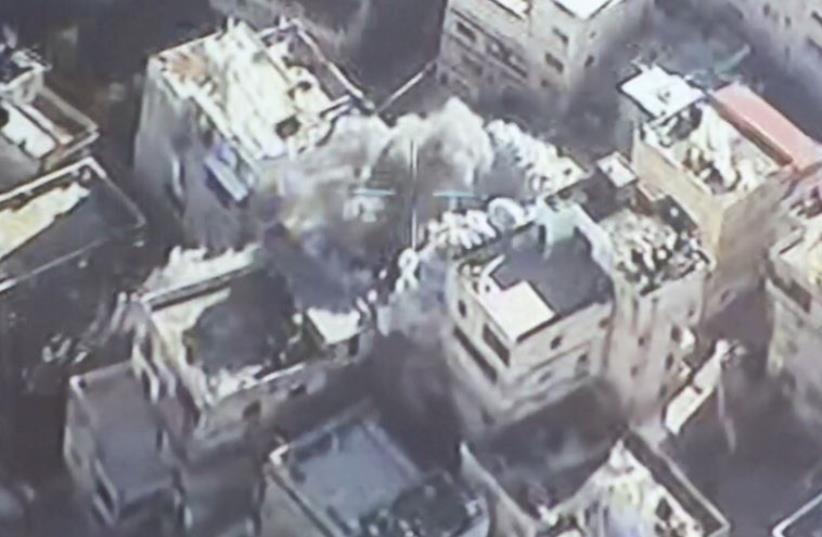 Aerial police photo of home demolition in east Jerusalem, December 2, 2015
(photo credit: POLICE SPOKESPERSON'S UNIT)
Advertisement
On the heels of two government- ordered Arab home demolitions in the southeast Jerusalem neighborhood of Jebl Mukaber on Wednesday morning, a new report claims that Arab home and nonresidential demolitions have increased in the capital this year.According to the WAFA Palestinian News Agency, at dawn Israeli soldiers presented demolition orders to the Oweisat and Abu Sakran families in Jebl Mukaber and then razed the newly constructed homes for being built without a permit.Neither family had moved into the small 100- and 120-sq.-meter residences, WAFA reported, and alleged they did not receive prior notice from the municipality. The municipality denied the claim.Suhail Khalilieh, head of the Settlement Monitoring Department at the Applied Research Institute – Jerusalem (ARIJ), who compiled Wednesday’s report – which the municipality patently refutes – said all the demolitions took place between January 1 and June 30.ARIJ’s website says its mission is to “effectively disseminate information and knowledge to Palestinian society… and actively participate in identifying and understanding the communities’ problems to achieve socioeconomic development.”On Wednesday, Khalilieh noted that the report distinguishes residential demolitions from nonresidential demolitions, which include stores, factories, and sheds.“During the first six months of this year, 72 homes were demolished in east Jerusalem, while 113 nonresidential structures were torn down by the government,” he said.“In all of 2015, we recorded 97 residential demolitions, and 65 nonresidential demolitions.”Khalilieh cited increased “collective punishment” against Palestinians in east Jerusalem resulting from ongoing terrorism which began in October, compounded by increased government power by right-wing parties, as the two key variables in the spike of demolitions.“Other than that,” he said, “the Israeli government and Jerusalem Municipality are using building permits as a pretext to block [Arab] construction and demolish their structures and homes.”“They know that they do not make it easy for Palestinians to build more homes as their population grows,” he continued. “They’re practically driving them out of east Jerusalem, but make it sound like it is voluntary.”Khalilieh claimed that home demolitions and the municipality’s alleged refusal to issue building permits are part of a “geographical and demographic war” against Jerusalem’s Arab community. He added that the municipality has no such restrictions against Jewish families.“They make it much, much easier for Jews to live and build in Jerusalem by [amending] the building codes when it comes to the Israeli settlers,” he said. “That’s why they are pushing Palestinians to leave.”Consequently, Khalilieh said many Arabs are indeed leaving the city to live in areas that are technically within Jerusalem’s municipal boundaries, but do not fall within the city’s master plan.He cited Kufr Aqab, the northernmost Arab neighborhood in east Jerusalem, and Bir Onah, a much smaller Palestinian community located near Bethlehem, as the most common areas for relocation.“There are approximately 40,000 to 50,000 Palestinians with Jerusalem ID’s living in Kufr Aqad, and about 1,000 in Bir Onah, although the numbers are growing [in the latter community] because they just began to move there a few years ago,” Khalilieh said.“And it’s more likely that once a wall is constructed around Jerusalem, that the government will reshape its boundaries again by taking many Palestinian communities outside of the city, and include settlement areas within the [municipal] boundaries.”If the growing exodus continues, he said that within 10 years the Arab population living in Jerusalem will drop from 37% of the city’s total population to 15%, “at most.”“That is why the Israelis are leading this demographic war: just to say at the end of the day that the Palestinian existence in Jerusalem is minimal, and therefore there is nothing to negotiate about when we talk about Jerusalem.”On Wednesday the Jerusalem Municipality issued a statement strongly refuting ARIJ’s report. It claimed there have been more demolitions in the west than the eastern portion of the capital over the past three years, and the overall citywide percentage of demolitions decreasing in east Jerusalem since last year.“Contrary to the claims raised, demolitions in the eastern part of the city as a percentage of city-wide zoning enforcement have decreased compared to previous years,” the statement said.While the municipality did not distinguish between residential and nonresidential units, according to its Zoning Enforcement Department, in 2014, 22 illegally built structures (47% citywide) were razed in east Jerusalem, while 25 were demolished in the west; in 2015 44 structures (47%) were demolished in the east, and 50 in the west; and during the first six months of this year 32 structures (44%) were demolished in the east, and 41 in the west.The municipality also denied ARIJ’s claim that it restricts building permits in the Arab sector, saying: “Jerusalem is a unified city, and all residents are entitled to live wherever they choose, as long as they do so in accordance with the law.”“The city does not discriminate based on race, religion, or gender in the granting of building permits or in zoning regulation enforcement,” the statement continued.“The municipality will continue to enforce the law equally in all parts of the city, preserving public areas for the benefit of local communities.”