Ahmad Tibi voiced anger over the fact that the prisoner is being cuffed to his bed at Barzilai Medical Center in Ashkelon. 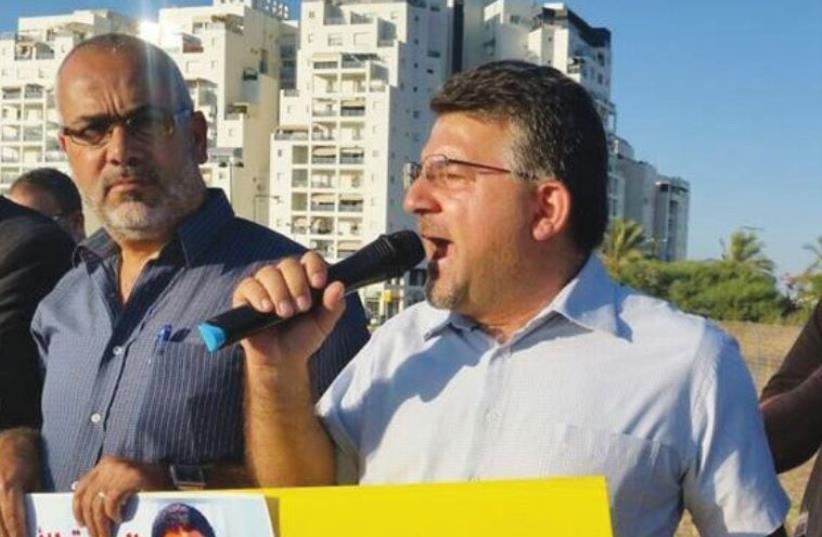 Yousef Jabareen shouts during a protest
(photo credit: COURTESY HADASH)
Advertisement
Arab MKs voiced support and worry on Thursday for Muhammad Allan, a hunger-striking Palestinian prisoner and Islamic Jihad activist being held in administrative detention.“I am very concerned about Allan’s health condition and we hold the government responsible for any further deterioration in his condition,” Hadash MK Yousef Jabareen told The Jerusalem Post on Thursday.“We call on the government to release him immediately. Allan has been protesting his draconian administrative arrest and it is about time for him to be free with his family.”Ta’al chairman and Joint List MK Ahmad Tibi voiced anger over the fact that the prisoner is being cuffed to his bed at Barzilai Medical Center in Ashkelon. He described the situation as worrying and said that it could be resolved if Allan were released from administrative detention.“What is the justification for cuffing someone who is sick, weak and on a hunger strike for 57 days,” he said, claiming that the only reason is “to humiliate him and crush his spirit.”Tibi claimed that doctors are also against the cuffs and keeping the curtains closed around the room.Joint List MK Abdel-Hakim Haj Yahya told the Post that the use of administrative detention by the government is unbearable, and against democracy and human rights.“If there is evidence, try him in a court. People are held for years without seeing their family or having any visits at all,” he said, adding that forced-feeding is against international standards. “There needs to be an agreement to cancel his detention. They need to release him. If they force-feed him, he could die,” he continued. Allan is “not dangerous” and there “is no proof,” he said.Yahya added that he is also against administrative detention for Jews, because the concept in general is a mechanism that allows the government to escape proving its case against a suspect in court.On Wednesday, Allan’s supporters clashed with counterprotesters near the hospital.Mounted police and other officers dispersed the demonstration.A number of protesters were detained and questioned, police spokeswoman Luba Samri said.Jabareen said he and around 200 protesting lawyers were provoked and cursed by “rightist-thugs” who gathered at the site.Tibi protested that he had to enter the prisoner’s room without his phone, saying “this is a hospital, not a prison.” He claimed that it violated his immunity as a Knesset member.Tibi also said that it was unnecessary since there were guards in the room. He filed a complaint with the legal adviser to the Knesset, asking him to clarify the regulations regarding the immunity of MKs.In a meeting with Hezi Levy, director of Barzilai Medical Center, and with the doctor running the intensive care unit where Allan is being monitored, Tibi was told that they would not touch the patient against his will unless it was to resuscitate him.Tibi called on Deputy Health Minister Ya’acov Litzman to order that Allan’s cuffs be removed. “The prisoner is determined to continue his struggle to cancel his administrative detention,” the Ta’al lawmaker said.Reuters contributed to this report.