It appears a number of Internet users have misinterpreted praise that the Egyptian leader reportedly lavished on Netanyahu. 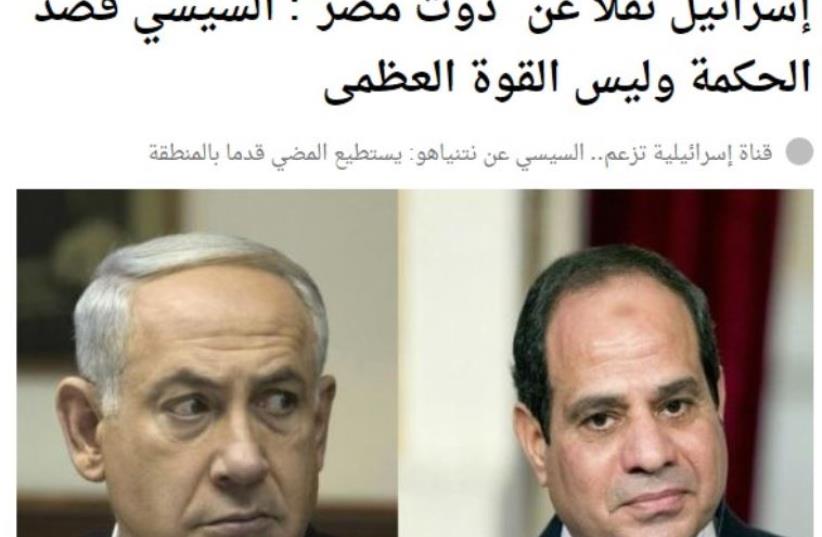 Screenshot of Egyptian website 'Dotmsr'
(photo credit: Courtesy)
Advertisement
What exactly did Egyptian strongman Abdel Fattah el-Sisi say to a group of American Jewish leaders about Prime Minister Benjamin Netanyahu?That has been a much-discussed topic on Arab social media in recent days, as it appears a number of Internet users have misinterpreted praise that the Egyptian leader reportedly lavished on Netanyahu.An Israeli internet report claimed that Sisi was overheard telling his guests that he viewed Netanyahu as “a leader with great powers that help him not only lead his country but also could propel the region – even the world – forward.”Egypt is also reportedly happy with Netanyahu’s initiative in building a fence along the Israel-Sinai frontier, which has helped reduce the amount of weapons being smuggled into Egypt from the Gaza Strip.It appears, though, that Sisi’s warm words for Netanyahu – if they were indeed uttered – caused a public stir.Arab social media users were struck by the positive words that Sisi said about Netanyahu, although it appears the president was misquoted – at least that is what the government in Cairo claims.According to an Egyptian news site, Sisi never told his American Jewish interlocutors that Netanyahu “can rule the world.”The Egyptians say that in his talks with American Jewish officials, Sisi commended Netanyahu’s “wisdom” in navigating the rough regional terrain.Cairo is particularly complimentary of Netanyahu’s willingness to accommodate the Egyptians in permitting the regime to deploy more military force in the Sinai Peninsula as part of Sisi’s efforts to crush jihadist insurgents.Egypt, which is bound by the peace accord with Israel to keep the Sinai demilitarized, has been pleased with Jerusalem’s flexibility on the issue.Although Israel and Egypt ended their state of war 37 years ago, the notion of normalized relations remains deeply unpopular in the Arab world's most populous country.Both governments take great pains to downplay cooperation with one another given the sensitivity and the negativity with which Israel is seen in Egyptian public opinion.The American Jewish delegation held an “open and very productive discussion” with Sisi on Thursday as part of their tour through the region.The delegation of the Conference of Presidents of Major American Jewish Organizations met with Sisi for two hours in Cairo.They discussed a “wide range of domestic and international issues, including US-Egyptian and Israeli-Egyptian relations, regional threats, especially those posed by terrorist organizations and their supporters, and Iran” post nuclear deal, the group said in a statement.The Conference leadership said that they had an “open and very productive discussion and that they were impressed by the President’s analysis on a wide variety of issues.”