A Palestinian armed with a knife was shot and killed by an IDF soldier and an Israeli civilian during what authorities are describing as an attempted stabbing in the West Bank. 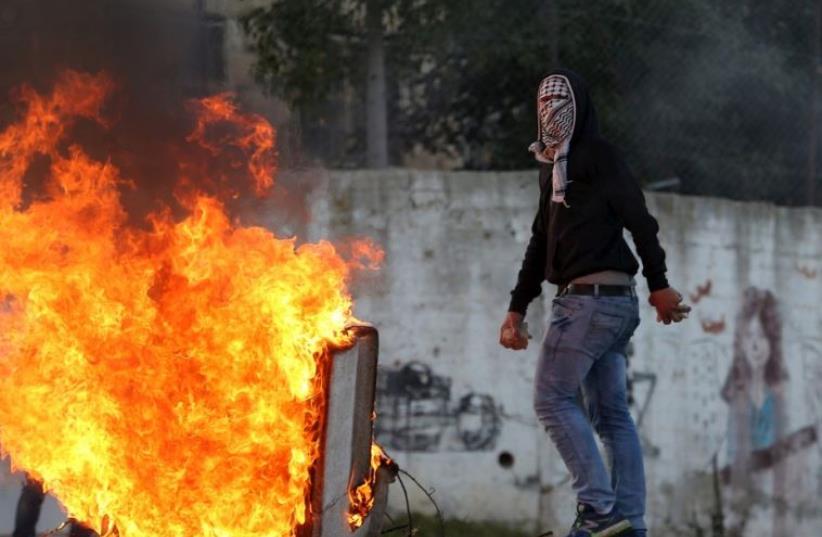 A Palestinian protester takes a position next to a fire during clashes with Israeli troops near Israel's Ofer Prison not far from Ramallah
(photo credit: REUTERS)
Advertisement
Israeli authorities said on Friday that soldiers and police thwarted two potential stabbing attacks in the West Bank, resulting in the death of one knife-wielding Palestinian assailant and the arrest of two others.A Palestinian armed with a knife was shot and killed by an IDF soldier and an Israeli civilian during what authorities are describing as an attempted stabbing in the West Bank.The incident occurred at the Gush Etzion Junction south of Jerusalem.According to the IDF, the Palestinian drove to the junction and tried to stab soldiers who were manning a post near the roadway.The troops noticed the assailant coming towards them and shot him dead. No Israelis were injured in the incident.Moments earlier, IDF soldiers and police arrested two Palestinian teens said to be armed with knives near the Sha'ar Binyamin industrial zone in the West Bank.The youths are suspected of planning to attack Israelis, according to authorities.A Palestinian motorist who drove the youths to the scene fled, and authorities are searching for the vehicle and its driver. The two youths were taken into custody for questioning.Israeli security personnel at the scene grew suspicious of the two Palestinians as they were approaching the industrial zone area.St.-Sgt. Tuvia Yanai Weissman, 21, was killed last month while trying to stop two Palestinian teenage terrorists from stabbing shoppers at a Rami Levy supermarket in the Sha’ar Binyamin industrial zone.Also on Friday, a Border Police officer suffered light injuries to his head during the course of rock-throwing demonstrations staged by Palestinians in the West Bank village of Ni'lin.Israeli forces responded to the rioters by using crowd dispersal methods.The injured officer was treated at the scene and evacuated for further evaluation, according to official statements.