Musab Firas Tamimi, age 17, was a distant relative of Ahed Tamimi, who has made headlines recently for a video in which she was filmed slapping IDF soldiers. 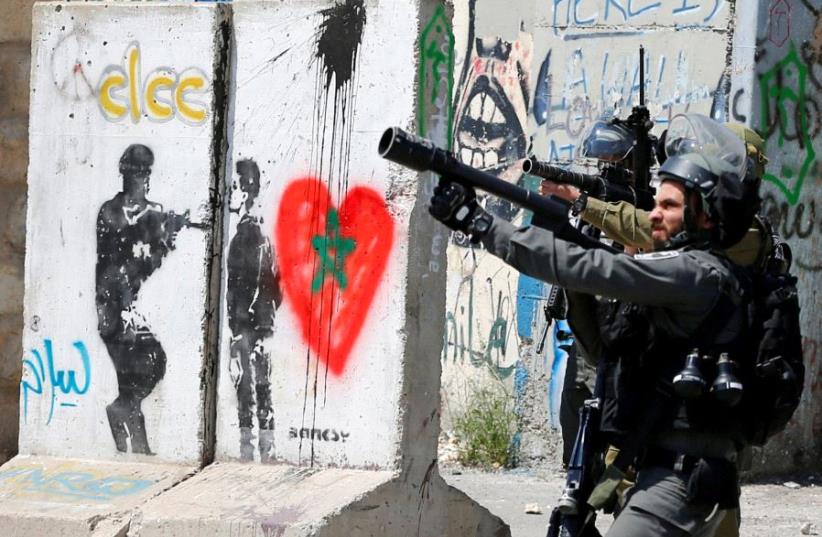 Israeli forces take position during clashes with Palestinian protesters following a protest in solidarity with Palestinian prisoners held by Israel, in the West Bank town of Bethlehem April 17, 2017
(photo credit: REUTERS)
Advertisement
Israeli troops shot dead an armed Palestinian teenager at a protest in the central West Bank on Wednesday, the IDF said.
Father of armed Palestinian shot dead by IDF soldiers in the West Bank, January 3, 2018
The youth was identified by Palestinian news agency Wafa as 17-year-old Musab Firas Tamimi from the village of Deir Nitham, north of Ramallah.According to the IDF the teenager was taking part in a violent protest of about 30 Palestinians and was holding a gun, which led to troops opening fire with live ammunition. Palestinian media reported that he was shot in the head and was evacuated by Palestinian Red Crescent to Istishari Arab Hospital in Ramallah, were he was pronounced dead.Tamimi is a distant relative of Ahed Tamimi, her father told The Jerusalem Post.  Ahed made headlines recently after a video of her and another teenager slapping IDF soldiers went viral. Tamimi was arrested in an overnight raid after the incident, and was indicted on Monday for threatening soldiers and inciting violence. The IDF stated that the circumstances of the incident are being investigated.At least a dozen Palestinians have been killed since US President Donald Trump recognized Jerusalem as Israel’s capital in mid-December, as thousands of Palestinians have been demonstrating across the West Bank, Gaza Strip and Jerusalem.