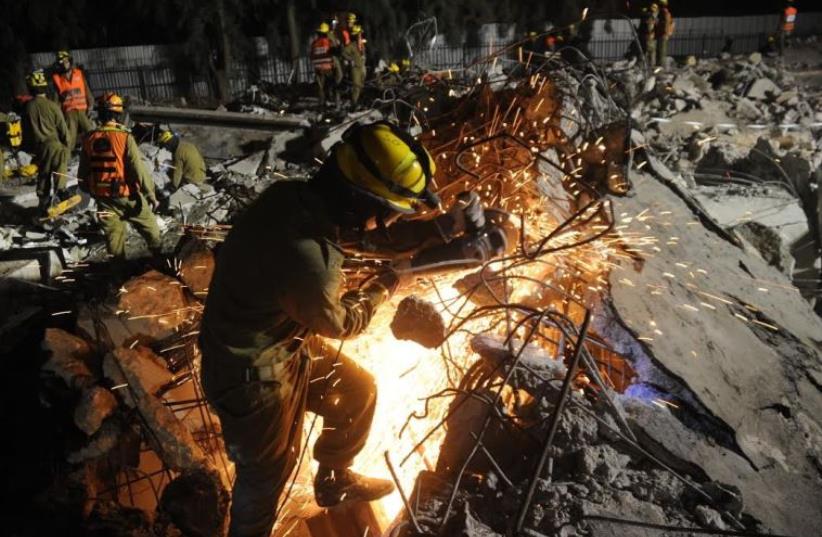 Home Front Command search and rescue drills [Illustrative]
(photo credit: IDF SPOKESPERSON'S UNIT)
Advertisement
The National Emergency Authority will this week test national and local responses to a massive wave of rocket and missile fire from Hezbollah in Lebanon and Hamas in Gaza. Authority head Betzalel Treiber said on Friday that the aim of Emergency Preparedness Week is to test responses among all emergency responders and the civilian sector “to potential scenarios that we expect.”The authority, a part of the Defense Ministry, has assessed that the home front’s current level of preparation for such a scenario is a little higher than average. But while stockpiles of medical equipment and food are satisfactory, much remains to be done to improve the country’s ability to supply fuel and power in a state of war, according to the latest assessments.Hundreds of people from government ministries, local councils, emergency services, water providers, and the Electric Corporation will meet in the coming week to discuss responses.“This threat forms a very significant challenge to the readiness of the home front, because Hezbollah and Hamas understand that the main target is the country’s home front, and the resilience of civilians and national infrastructure,” Treiber said.Preparations include ensuring the ability to initiate an evacuation of highly threatened areas, he said, stating, “We understand that, if necessary, we will have to evacuate tens of thousands of people in the South and North. We are cooperating mainly with government ministries and municipal councils.”Enabling a large urban area to function under fire for a lengthy time is a central focus of the week.The current level of readiness in the Israeli home front is “a little better than average,” Treiber said. “We have much to do, like raising awareness, preparing plans for the provision of vital services...Whole systems, like welfare and health, are better prepared. We have gaps in stockpiling goods, particularly in fuels and refined petroleum,” he added.Foods and medical equipment stockpiles are in a good state, he said.According to a poll conducted by the National Emergency Authority, 14 percent of civilians would want to evacuate their homes in case of a massive missile attack; 67% would not go to work; 25% would feel safe; only 9% of parents would send their children to schools; and 92% of the public believe they would know what to do in such a situation.Results indicated that “there is a problem in the sense of security and safety among people, with an emphasis on the northern border.We understand that parents have a significant problem [in sending children to school during war],” Treiber said.Separately, the IDF Home Front Command announced on Saturday night that it would hold drills in the Western Galilee in the coming days.During the exercise, some areas will experience heavier traffic of security vehicles, and fireworks and smoke grenades will also be visible.