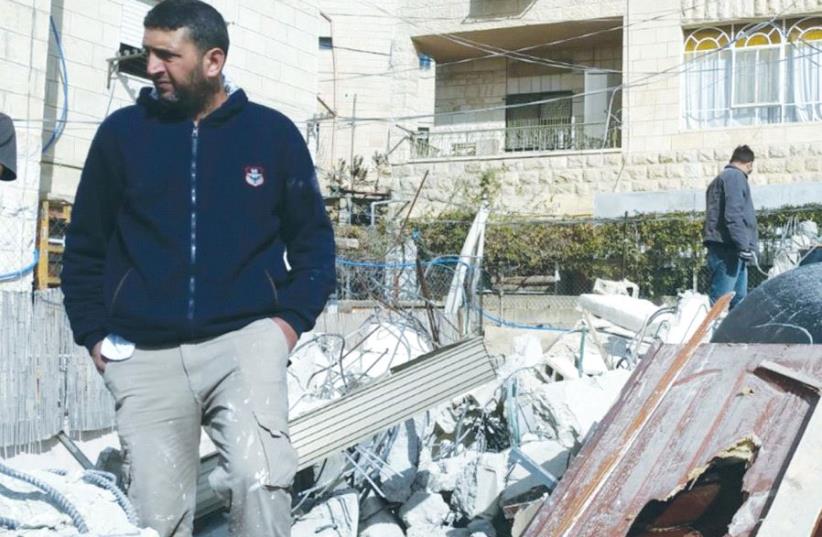 A MAN walks through the rubble of the Beit Hanina home demolished yesterday on orders of the government.
(photo credit: HUSSAM ABED/B’TSELEM)
Advertisement
Three months after the Jerusalem Municipality announced plans to demolish 14 illegally built homes in east Jerusalem’s Beit Hanina neighborhood, government bulldozers razed the first Arab residence there Wednesday morning, displacing a family of seven.The move comes three weeks after 40 Jewish families from the West Bank outpost of Amona were forcefully evacuated from their homes, which the High Court ruled were illegally built on Palestinian land.Shortly after the contentious court ruling on Amona, Jerusalem Mayor Nir Barkat called for the demolitions of the Beit Hanina homes, which the court ruled are situated on private Jewish land managed by the administrator-general of the state.Much like the traumatized families from Amona, Wednesday’s demolition of the Abu Rmouz family home resulted in displacement and profound uncertainty for the parents and their five children.According to multiple witnesses, municipal bulldozers, accompanied by a large security detail, arrived at the home shortly after 5 a.m. Luay Abu Rmouz, who built the house, told Arab media the family was forced to evacuate without clearing their furniture and possessions.However, Abu Rmouz, who attempted to fight the demolition in court, conceded that the municipality held a final court session two weeks ago when it was ruled his house would be razed.Still, he said he had planned to present another appeal and claimed he was shocked when the bulldozers arrived.Abu Rmouz said he constructed the house seven years ago after repeatedly failing to procure a building permit from the municipality. He added that he has paid NIS 80,000 in fines in a futile attempt to retroactively legalize the residence.In keeping with state law, the municipality offered him the option of demolishing the home himself or paying tens of thousands of shekels for the demolition crew sent on Wednesday.“It is difficult for me to demolish my own house with my own hands when I built it myself,” he told the Ma’an news agency. “I was shocked by the way they raided my home and dealt with the family before carrying out the demolition.”Barkat has said the Amona ruling clears the way for carrying out hundreds of similar demolitions against Arab residents living in illegal east Jerusalem homes.“Our hands are now tied, and [the ruling] had to reach Jerusalem,” he said following the Amona outcome. “There is not one law for Jews and another law for Arabs.”It is estimated that there are hundreds of Arab families living in illegally built homes on Jewish land in east Jerusalem, though only a fraction of the proposed demolition orders have been issued to date by the municipality.“Now, following the High Court’s ruling in the case of Amona, the Jerusalem Municipality will be required to carry out the demolition orders issued by the said courts,” said Barkat.Amit Gilutz, a spokesman for B’Tselem – The Israeli Information Center for Human Rights in the Occupied Territories, which works closely with displaced Arab families in east Jerusalem and the West Bank, said Barkat is cynically manipulating the Amona ruling.“From our perspective and analysis, the [municipality] is clearly citing Amona as a smokescreen for a consistent policy that is now escalating,” he said Wednesday.“In 2016, we saw a record-high number of demolitions in east Jerusalem with 88 residential structures and 48 other structures demolished – rendering 285 people homeless, including 160 minors. This is the highest number of demolitions we’ve seen since we began systematically collecting data in 2004.”Gilutz described the demolitions as “organized violence” used to minimize the number of Arabs in east Jerusalem. Citing illegal construction, he said, is the most effective means of changing facts on the ground.“It’s a cynical pretext because the state creates the law and it’s created in such a way in which it is almost impossible for Palestinians to build legally by not granting construction permits,” he said. “And, without them, Palestinians are forced to build illegally and then go through a process of criminalization just because of natural birthrates and expansion.”According to Gilutz, issuing a scarcity of building permits is part of the municipality’s “longterm plan” to diminish the Arab presence in Jerusalem while transferring Jews there.Barkat, however, has long contended that there is no correlation between race, religion and the issuance of housing permits.“Jerusalem is a unified city,” he said. “And all residents are entitled to live wherever they choose as long as they do so in accordance with the law.”