Sheikh Abu Bilal Ismail said in a fiery 2014 sermon at Berlin's Al-Nur mosque: “Oh, Allah, destroy the Zionist Jews, they are no challenge for you." 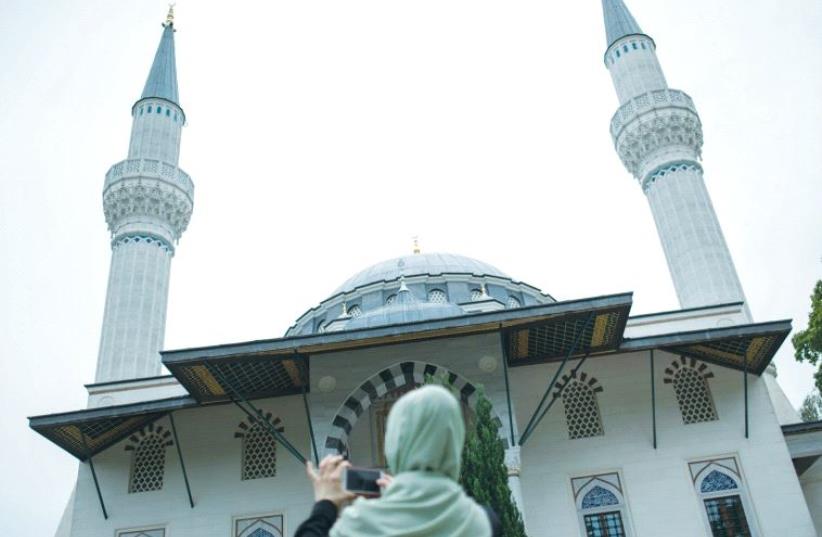 A Danish imam convicted for inciting hate after he preached for the extermination of Jews during Israel’s Operation Protective Edge in 2014 appeared on Friday in Berlin at a radical mosque, triggering a new round of criticism against Mayor Michael Mueller for his failure to rein in Islamists who advocate lethal antisemitism.Sheikh Abu Bilal Ismail said in a fiery 2014 sermon at Berlin’s Al-Nur mosque: “Oh, Allah, destroy the Zionist Jews, they are no challenge for you.” He added: “Count them and kill them to the very last one. Don’t spare a single one of them. Make them suffer terribly.”The Lebanese-born cleric’s sermon was caught on video and generated international criticism.Ismail was slated to speak on Friday at Berlin’s African mosque, but was replaced at the eleventh hour by a Syrian imam who warned about spies within the congregation.The Free Democratic Party politician Marcel Luthe, who is a member of the Berlin state parliament, told the B.Z. paper: “The Senate [i.e. Mueller’s administration] learned nothing from the appearance of the Islamic terrorist preacher at the Fussilet and Al-Nur mosques and continues to not take seriously the stoking of terrorism under the cover of practicing religion. These types of appearances should be carefully monitored.”Anis Amri, the Islamic State terrorist who killed 12 people in a terrorist attack in Berlin in December, attended the Fussilet mosque before the attack. The Israeli citizen Dalia Elyakim was one of the victims of Amri’s Islamic terrorism.Luthe urged criminal penalties for incitement to hatred in connection with such appearances.Ismail was filmed in 2016 at the Danish Grimhøj mosque in Aarhus stating: “If a married or divorced woman engages in fornication, and she is not a virgin, she should be stoned to death.”The radical Islamist continued: “If someone violates their marriage, either man or woman, they commit adultery and their blood is thus halal and they should be killed by stoning. If the woman is a virgin, the punishment is whipping.”The Grimhøj mosque announced its support for Islamic State in 2014.When Ismail was asked by a B.Z.reporter on Friday what he meant by stoning and killing Jews, a companion of Ismail said the statements “were taken out of context.If the media were honest, he would say something.” Ismail then laughed, according to the B.Z.The B.Z.’s Til Biermann reported that nearly 100 people appeared on Friday expecting to listen to Ismail’s sermon. Women were not allowed into the prayer room where the men prayed.The Christian Democratic Union city councilman Falko Liecke told the B.Z. that the Mueller administration must ban the mosque. “This hate and violence contradicts everything that we stand for.”He said it is not the first time that extremist positions were spread at the African mosque. “It is one of the radical hot spots in Berlin.”Jerusalem Post queries to Mueller were not returned.In 2015, a Berlin criminal court fined Ismail €1,300 for inciting hatred against Jews at the al-Nur mosque. The court found that Ismail, 49, and a father of nine, had delivered a “hostile and hatefilled view toward Jews as a population group in Germany.”Yesh Atid chairman Yair Lapid blasted Mueller in June for permitting the Al-Quds march in Berlin. Lapid wrote in a letter to the mayor: “The leader of Hezbollah, whose image was held aloft in your streets, delivered his Al-Quds Day speech in Lebanon this week while crowds chanted ‘Death to Israel.’ “When people march in the streets of Berlin holding up photographs of the leader of Hezbollah, they celebrate the murder of our families and of our children, they celebrate the attempt to destroy the fragile coexistence between Jews and Arabs in Israel. They celebrate terror.”Lapid continued: “Mr. Mayor, your decision to remain silent in the face of this incitement and hatred is a grave mistake. Allowing the glorification of terrorism in your city won’t appease extremists, it will embolden them.”According to Berlin’s most recent intelligence agency report from 2015, there are 250 active Hezbollah members in the city.The report documented 70 Hamas members in Berlin.Germany and the EU classify Hamas as a terrorist organization and Hezbollah’s so-called military wing as a terrorist entity.It is unclear why Mueller’s administration has not clamped down on Hamas operatives.