The terrorists who carried out the attack were shot and killed on the scene; two soldiers wounded. 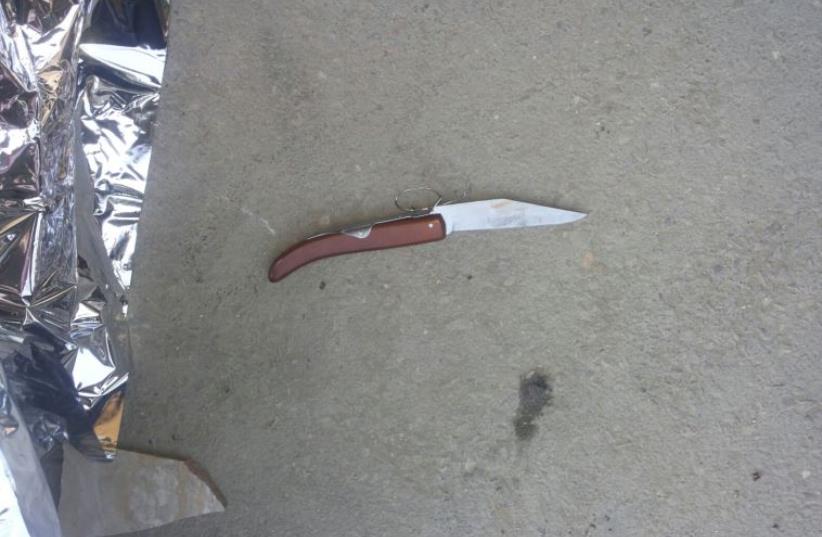 Scene of stabbing attack near Hawara in the West Bank
(photo credit: YITZHAR SECURITY)
Advertisement
Palestinians wounded two soldiers on Sunday in separate attacks, one on each side of the Green Line.In the most serious incident, two Palestinians armed with knives moderately wounded a soldier while he and a comrade were patrolling near Huwara, at the southern entrance to Nablus. Soldiers at the scene shot and killed both attackers.An additional soldier was lightly wounded by friendly fire.Magen David Adom Paramedics evacuated two soldiers aged 20, from the Hemshehit junction to the Rabin Medical Center-Beilinson Campus in Petah Tikva.Palestinian media reports identified the terrorists as Muhammad Sabana, 17, and Nur Sabana, 23, from Kafr Kabatiya, south of Jenin.Sunday’s other attack took place in the early morning, behind the Jerusalem Central Bus Station.A 30-year-old Arab wielding a large kitchen knife stabbed and moderately wounded a soldier before security guards and police overpowered him.Jerusalem police said that the terrorist followed the soldier as he walked down Hatzvi Street and stabbed him in the shoulder. The attacker tried to stab the soldier again, but the soldier pushed him to the ground, and moments later, a security guard came and kicked the knife away from the terrorist and held him until officers arrived, police said.Police said the attacker is a 30-year-old man with a blue Israeli ID card (Jerusalem residency) who lives in Eizariya (Bethany), on the southeastern slope of the Mount of Olives, just outside the capital.MDA issued a statement on Sunday morning saying that the soldier was moderately wounded and that passersby gave him treatment, helping to stop the bleeding until paramedics arrived to evacuate him. By the evening, the soldier had been discharged from the hospital.A few hours after the Hatzvi Street stabbing, another attack was narrowly averted in the capital’s Old City, according to the Jerusalem district police spokesman. In that incident, officers stopped a young Palestinian man who was acting in a suspicious manner. When they asked him for his identity card, he pulled out a knife, and was overpowered and arrested.The man, a resident of El-Bireh, near Ramallah, was taken in for questioning.Also on Sunday, security forces arrested a Palestinian woman who allegedly tried to stab a security guard at the gate to Ma’aleh Shomron in Samaria. A car approached the fence around the settlement, drawing the attention of security personnel. As they approached the vehicle, a woman in the driver’s seat threw a knife at the officers and tried to escape. She was arrested and taken into custody.Over the weekend, two Palestinians attempted to drive into security personnel. One attacker was fatally shot and the other was wounded.