Security forces shoot and wound the assailant at the scene on Route 60. 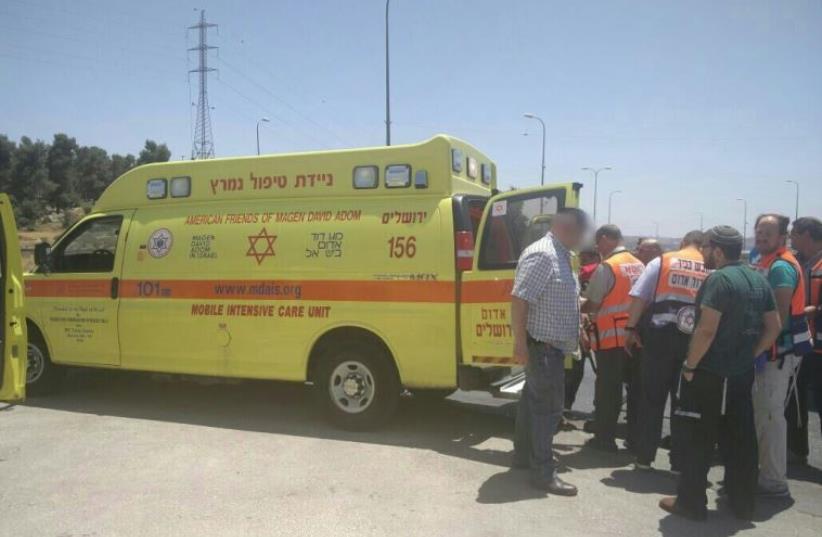 Ambulance at scene of stabbing attack in Gush Etzion, July 18, 2016
(photo credit: MAGEN DAVID ADOM)
Advertisement
A Palestinian terrorist carried out a stabbing attack at the al-Aroub IDF checkpoint on Route 60, south of the West Bank’s Gush Etzion Junction on Monday, the army said.Two IDF soldiers sustained light wounds after a Palestinian knife attacker struck them. Soldiers on the scene shot and seriously wounded the attacker.According to Wafa, an official Palestinian news site, a Palestinian Red Crescent medical crew, returning to the Hebron region from a task in Jerusalem, provided initial treatment to the two wounded soldiers and attacker.Thereafter, Magen David Adom medical crews arrived at the site of the attack, provided additional treatment, and evacuated the wounded to hospitals.The attacker was identified as Mustafa Brada’yeh, a 50-year-old mathematics teacher originally from Beit Surif, but living and teaching in Beit Fajjar.Brada’yeh’s brother, 54-year-old Ibrahim Brada’yeh, attempted to attack soldiers with an ax in April, and was shot dead on the spot by the soldiers.According to initial reports, the assailant arrived at the scene with a knife and a screwdriver, using the latter to stab the soldiers.Palestinian terrorists have killed 25 people in 22 years along a 16-kilometer stretch of Route 60 in the South Hebron Hills.The latest victim was Rabbi Michael Mark, who was shot to death as he drove with his wife and two of his children from their home in the settlement of Otniel to Jerusalem on July 1.Route 60, stretching from Nazareth through Jerusalem to Beersheba, has seen its share of terrorist attacks, particularly around the Gush Etzion junction, where five people have been killed in the last eight months.Tovah Lazaroff contributed to this report.