A Palestinian gunman shot dead two Israeli parents in a shooting attack on their vehicle in Samaria, leaving their four children orphaned. 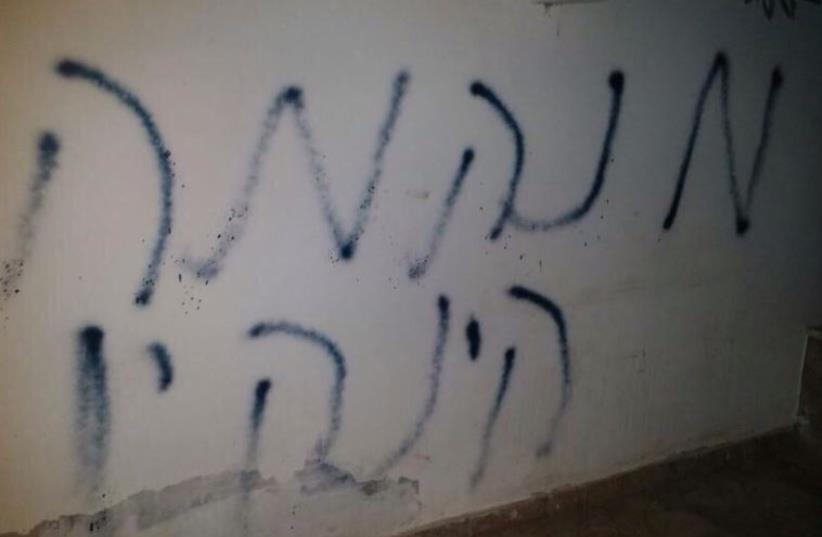 Retaliatory vandalism in the village of Beitilu, West Bank on October 2, 2015.
(photo credit: Courtesy)
Advertisement
Shorty after the fatal shooting of Eitam and Na'ama Henkin in the West Bank Thursday night, a vehicle was set ablaze in the village of Beitilu near Ramallah in what the police believe was a retaliatory attack. Scrawled on a wall near the torched car read the phrase "Revenge Henkin" in Hebrew.Civil administration officials arrived at the scene together with Israeli Security Forces Friday morning and opened an investigation into the incident.
A Palestinian gunman shot dead two Israeli parents in a shooting attack on their vehicle in Samaria, between Elon Moreh and Itamar on Thursday night; Four of their young children survived the attack without injury and were rescued by emergency responders from the bullet-ridden vehicle.Magen David Adom paramedics and IDF units pulled the children out of the car near the Palestinian village of Beit Furik, and paramedics declared the parents dead on the scene after failing to detect vital signs.The victims were identified as Eitam, 31, and Na'ama Henkin, 30, from the settlement of Neria, in the Binyamin region of the West Bank. Eitam’s mother Channa, who is from the United States, heads the Nishmat seminary for women in Jerusalem.Prime Minister Benjamin Netanyahu, who had just finished addressing the UN General Assembly in New York, told reporters, “This is a difficult day for the State of Israel."“We are witness to an especially heinous and shocking murder in which parents were murdered, leaving four young orphans. It remains unclear whether the shots were fired from a moving vehicle, or whether terrorists laying in ambush had targeted the car.
There were no eyewitnesses besides the children. Security personnel hope to be able to speak to them to piece together an account of the shooting.“A large-scale search is under way,” a senior security source said. “Our forces know how to track down the perpetrators.”The IDF had no concrete intelligence alerts for this area prior to the attack; only a general security alert was in place.