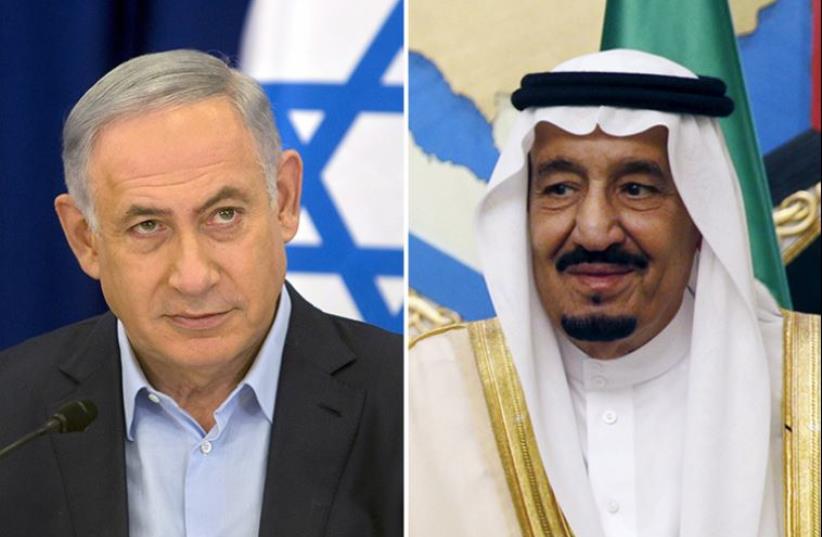 Netanyahu and Saudi King Salman
(photo credit: REUTERS)
Advertisement
China spoke of the importance of Middle East peace ahead of Prime Minister Benjamin Netanyahu’s departure for China on Sunday for a three-day trip to advance economic ties between the two countries.He will arrive just after Saudi Arabia’s King Salman concludes his own three-day trip, in which the Israeli- Palestinian conflict was on the agenda along with economic issues. Earlier in the week, Deputy Crown Prince Muhammad bin Salman met with US President Donald Trump in Washington.On Friday, Chinese Foreign Ministry spokeswoman Hua Chunying noted that “Both Saudi Arabia and Israel are influential countries in the Middle East,” in response to a reporter’s question about China’s role in improving relations between the Israel and Saudi Arabia, which do not have diplomatic ties.
Netanyahu departs to China (credit: GPO)
“It is hoped that the two sides will each make their contributions to the realization of enduring peace and development in the Middle East,” Hua said.While the Trump administration is weighing a drive to resume Israeli-Palestinian talks through a regional process, China is looking to increase its role in the Middle East, particularly with respect to the Israeli-Palestinian conflict and the Syrian crisis. It is one of the six world powers and one of five members of the UN Security Council with veto power.Earlier this month, Chinese Foreign Minister Wang Yi said, “The issue of Palestine is an open wound in the Middle East. Peace may be delayed, but justice cannot be denied. China firmly supports the two-state solution and will continue to do what we can to help restart the peace talks.”China is one of Israel’s top trading partners, but the two governments are often at odds on regional issues.Beijing has strong ties with Tehran and recognizes Palestine as a state.In talking about the trip on Thursday, Netanyahu focused solely on economic matters, particularly the process begun last year toward signing a free-trade agreement between the two countries.“We will continue the talks on establishing a free-trade agreement between China and Israel and we will hold the third joint Israel-China innovation conference,” he said.“Of course we are continuing to develop new markets and to open new markets for the Israeli economy. I expect all ministers to cooperate on this, and they are doing so,” Netanyahu added.The leaders will look at ways to increase Israeli exports, Chinese investments and cooperation in industrial research by businesses in both countries.They will also sign a number of economic agreements to make it easier for Israeli companies to be active in China and export their products.“Israel and China will sign cooperation agreements in aviation, education, bringing Chinese construction workers to Israel, science, health, environmental protection and a multi-year plan for a task force on strengthening bilateral economic ties,” the Prime Minister’s Office said.The trip marks 25 years of diplomatic relations between the two countries, and will include meetings with President Xi Jinping, Prime Minister Li Keqiang and the heads of major Chinese corporations.Netanyahu will also chair a business forum with 500 invited guests and attend the third joint Israel-China innovation conference.Among those traveling with the prime minister are Environmental Protection Minister Ze’ev Elkin, Economy Minister Eli Cohen, Science, Technology and Space Minister Ofir Akunis, Health Minister Ya’acov Litzman and Agriculture Minister Uri Ariel.Netanyahu last visited China in 2013. Former prime minister Ehud Olmert traveled to China in 2007 to mark 15 years of diplomatic ties.