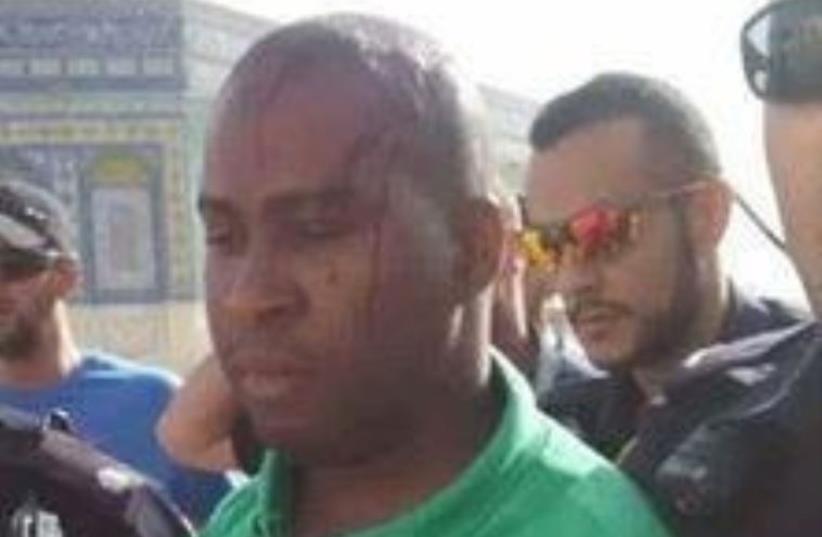 Tourist attacked at Temple Mount
(photo credit: ARAB MEDIA)
Advertisement
A Christian tourist from France who was beaten by Muslims on the Temple Mount Tuesday morning after raising an Israeli flag near al-Aksa Mosque may face legal charges for incitement and disturbing the public order at the contested holy site.According to police spokeswoman Luba Samri, the attack took place shortly after visiting hours for non-Muslims commenced.When the 35-year-old man removed the flag from his bag and raised it, four Muslim men attacked him, leaving him bloodied.The four assailants were detained, and the tourist was treated at the scene for a light head wound and then escorted off the compound by police and detained for questioning.He may face legal charges for incitement, Samri said, adding that visiting hours resumed after the assault without further incident.Tuesday’s unrest comes amid markedly heightened tension on the Temple Mount following a Sunday riot there by dozens of Muslim youths, who threw rocks and firebombs at police to protest the murder of a Palestinian infant in the West Bank village of Duma.Tensions were also exacerbated during Tisha Be’av last month when hundreds of Muslims staged a riot in an effort to prevent Jewish visitors from ascending the mount on the day of mourning.Although the Supreme Court has upheld Jewish prayer rights at the Temple Mount – which is overseen by the Wakf Muslim religious trust – the court allows police to prevent any form of worship there if they believe such activities will incite a “disturbance to the public order.” Apart from forbidding open displays of Jewish prayer, expressions of Israeli nationalism are deemed to be a form of incitement and have resulted in detention and arrests.