Corpse of Palestinian terrorist returned after 6 months for restricted burial 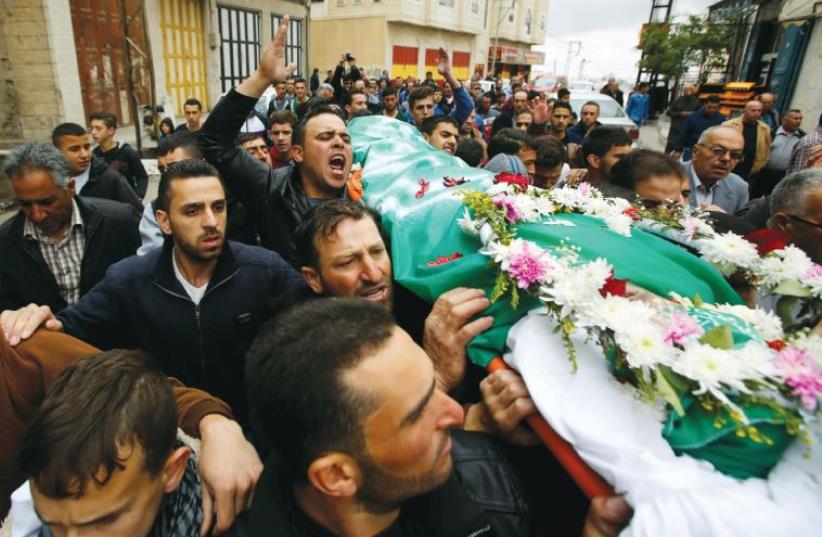 Mourners carry the body of Palestinian assailant Abdel Fattah al-Sharif, who was shot and killed after being wounded last March by an Israeli soldier, during his funeral in Hebron on May 28
(photo credit: REUTERS)
Advertisement
The corpse of a Palestinian terrorist killed during an attack near the light rail outside Jerusalem’s Old City in March was returned to his family by authorities for burial in east Jerusalem early Thursday.Muhammad Jamal al-Kalouti, 21, of Kafr Aqab, was shot dead by Border Police outside the New Gate on March 9 during a shootout with officers. In the exchange, al-Kalouti shot and critically wounded an Arab-Israeli man in his 50s.As part of the government’s controversial policy to avert further Palestinian violence, police waited until after midnight to return al-Kalouti’s body, and restricted attendance at the funeral in the capital’s Bab al-Zahra cemetery to 30 friends and family members.No incidents of violence took place during the heavily-guarded funeral, police said.The government continues to delay the return of bodies as a means of deterrence saying burial ceremonies for Palestinian terrorists frequently devolve into raucous and violent events that celebrate the deceased as a “martyr” and entice other impressionable terrorists to kill.However, the practice is not without its detractors, who claim it is inhumane.Moreover, after receiving a petition from the family of one of the terrorist’s demanding the return of his body, the High Court last month ordered police to provide a legal justification for the protracted practice. The petition states that the family’s request was refused, despite agreeing to police demands of a peaceful, limited funeral.While Defense Minister Avigdor Liberman mandated a moratorium on returning terrorists’ bodies following a deadly attack in June, Attorney-General Avichai Mandelblit has deemed that there is no security justification to continue to do so.Meanwhile, citing burial protocols adopted by the government during the second intifada, Public Security Minister Gilad Erdan has argued that terrorists should be buried in a designated cemetery without being returned to family members.The government is still withholding the bodies of six other east Jerusalem terrorists who were involved in attacks since a wave of terrorism engulfed the capital last September.