"It is absurd to condemn terror, while at the same time paying terrorists." 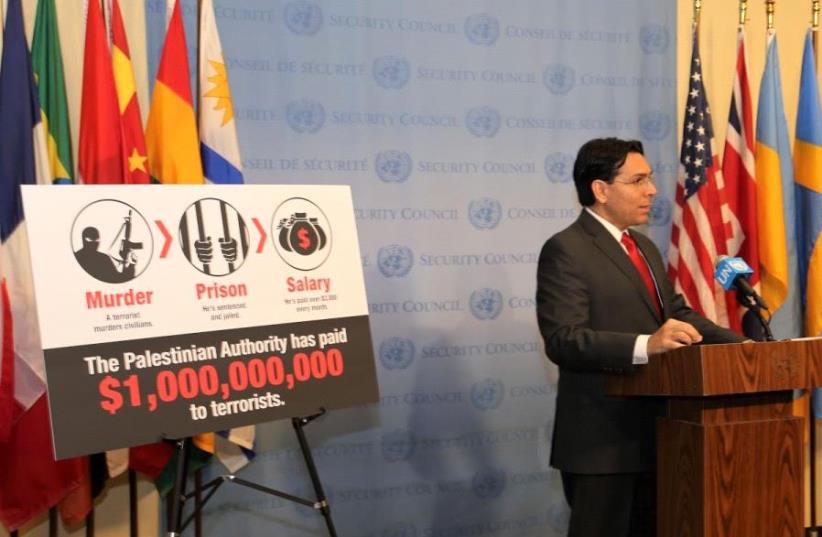 Israel’s ambassador to the United Nations Danny Danon
(photo credit: COURTESY OF THE ISRAELI MISSION AT UN)
Advertisement
NEW YORK - Israel’s ambassador to the United Nations Danny Danon asked the UN Security Council on Thursday to “take action” and call on the Palestinian Authority to stop paying terrorists for killing civilians in Israel.“In 2016, the PA dedicated almost $130 million of its budget to paying imprisoned terrorists,” he said during a short press conference. “They spent another $175 million in allowances to the families of so-called martyrs. Altogether, the PA paid more than $300 million directly in support of terrorists every single year.”This amount, he said, comes up to about seven percent of the Palestinian Authority’s yearly budget, and almost 30 percent of the foreign aid donated by the international community.“So many members of the Security Council, so many UN member-states are sending their people’s money to support terrorists,” he pointed out.Danon cited the cases of American citizens Taylor Force and Ezra Schwartz, as well as British citizen Hannah Bladon, all killed by Palestinian terrorists in Israel, who he said were later compensated thousands of dollars for their actions.“This is all part of an organized system by the PA which glorifies terrorists and encourages terrorism, these payments are mandated by their laws,” he said. “Think about the simple message this sends to young Palestinians. Mahmoud Abbas is telling them that there is a simple equation: kill innocent people and you and your family will be paid for the rest of your life.”The ambassador, who sent an official letter about the issue to the Security Council on Wednesday, called on the international community to follow their payments to the PA and make sure the funds don’t go towards remuneration for terrorists, and stop pledging to work towards peace while indirectly supporting terrorism.“It is absurd to condemn terror, while at the same time paying terrorists,” he said. “It’s time for the UN, the Security Council, and the entire international community to finally tell Abbas that enough is enough.”