Danon to Security Council: Demand an end to Palestinian incitement

“The council must demand real action by Mahmoud Abbas, make him stop his tacit support for terror." 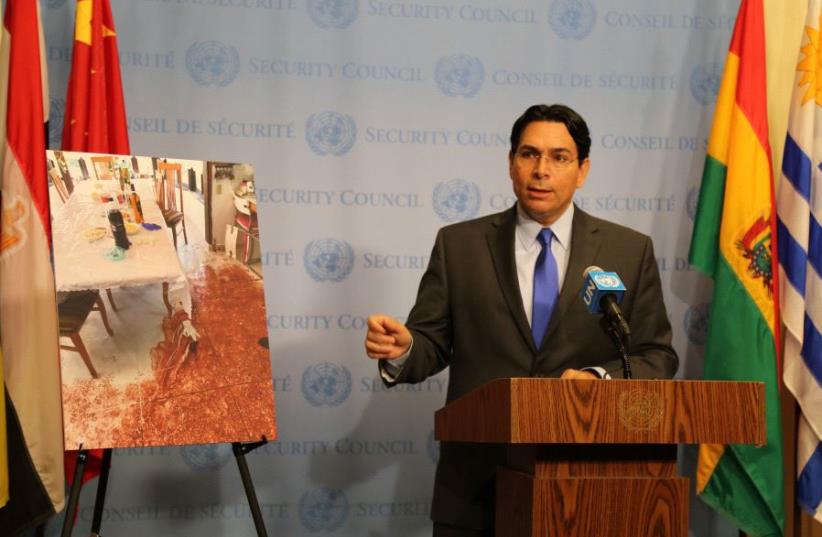 Israeli Ambassador to the United Nations Danny Danon addresses the press outside the UN Security Council, July 24, 2017.
(photo credit: ISRAEL MISSION TO THE UN)
Advertisement
NEW YORK -  If the Security Council wants to deescalate the situation in Israel, they should demand that the Palestinian Authority stop promoting violence, Israel’s Ambassador to the United Nations Danny Danon said in a statement on Monday as the council’s members met to discuss the issue.“We do not need more carefully-worded statements asking for calm,” Danon told the press. “The council must demand real action by Mahmoud Abbas, make him stop his tacit support for terror, force him to end this unbearable wave of violence, and make him do so immediately before the lives of more innocent victims are lost.”During his remarks, Ambassador Danon showed one of the gory pictures from the stabbing attack in Halamish on Friday, where three members of the Salomon family were murdered in their home. The picture, displayed beside him, showed the Salomon’s dinner table and the blood-soaked floor underneath. “As diplomats, as ambassadors, as leaders, it is not often that we are at a loss for words,” he said. “When I learned of the horrific terror attack this past Friday evening,  when I saw the ghastly pictures of the Shabbat meal interrupted by a vile terrorist, I was left speechless.”Monday’s closed Security Council session on the recent wave of violence had been requested by Sweden, France and Egypt on Saturday. “This attack is not an isolated incident, it is part of the wave of terror sweeping the free world,” Danon continued. “Some experts classify these terrorists as lone wolves, acting on their own but we know this is not the case. These terrorists are brainwashed with the same hateful teachings they are all taught: that violence and cold-blooded murder is holy.” The ambassador added that instead of condemning this act of terror and calming the situation, Palestinians are “spreading the most horrible lies.”“They would like the international community to believe that this unspeakable act of violence is Israel's fault,” he said. “Don't believe the phony Palestinian outrage.” He also reiterated his call for the Security Council to make Palestinian Authority President Mahmoud Abbas stop paying terrorists.“The terrorist who slaughtered the Solomon family last Friday did so knowing that the PA plans on paying him,” Danon said. “He had the courage to kill because he knew it would put him on Abbas’ guaranteed payroll for the rest of his life. From Friday evening, he is receiving $3,000 a month.”Ambassador Danon has pushed the issue surrounding the payments for several month at the UN. He is expected to do so again on Tuesday, during the Security Council’s monthly open debate on the Middle East. He will also hold a press briefing on the topic immediately after the session. When asked whether or not metal detectors will remain at the entrance to Temple Mount, Danon stated that Israel’s priority is maintaining security at the holy site. Mahmoud Abbas’s decision to sever cooperation with Israel until it reverses its decision to maintain the devices in place, Danon added, is a mistake. “The corporation is beneficial for both sides, for the Palestinians and the Israelis, and I think it will be for the benefit of the Palestinian people that we will continue to cooperate,” he said. The United Kingdom's Ambassador to the UN Matthew Rycroft, who also stopped to address reporters before the meeting, said the UK strongly condemns Friday night’s attack on the Salomon family. “We are worried about an escalation and it’s important the Security Council plays its part in calling for calm,” he said.