Senior security source says suspects are considered to have committed a hate crime. 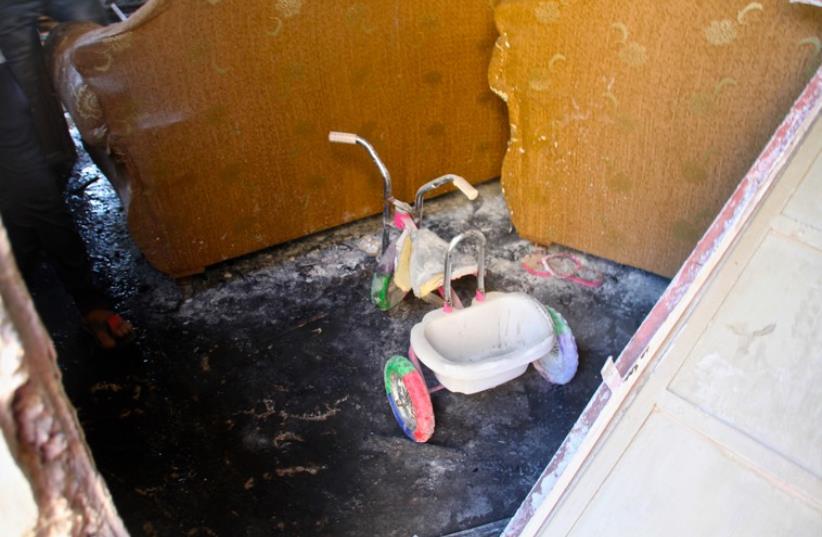 Photo of a tricycle that survived the fire in the Dawabsha home on Duma
(photo credit: TOVAH LAZAROFF)
Advertisement
In the aftermath of a deadly arson attack on a Palestinian family by suspected far right terrorists, Defense Minister Moshe Ya'alon has ordered security forces to activate their powers to place far right figures in administrative detention.The order came as security forces , led by the Shin Bet domestic intelligence agency, are in the midst of an intensive manhunt for the perpetrators.A senior security official told Israel Radio that there is no choice but to treat the suspects of the attack as having committed a hate crime against Palestinians, just as is done with Palestinians suspected of committing attacks. The official noted that the suspects were sophisticated in their crime since they did not bring any mobile phones with them in order to avoid being tracked.
Netanyahu gives statement at hospital after visiting Palestinian burn victim
A little before 4 a.m. on Friday, two masked men reached two homes in the Palestinian village of Duma, broke windows, and hurled Molotov cocktails inside.Both homes caught fire. One building was empty at the time, but the second had a family inside, and the flames spread, killing a one-and-a-half year-old baby, Ali Dawabsha. His four-year old brother and both his parents were injured. The baby’s mother sustained 70 percent burns.Israel air lifted all family members to the Tel Hashomer Medical Center for emergency treatment.Israeli officials of all stripes harshly condemned the incident. Prime Minister Benjamin Netanyahu said directly after the attack that he was "shocked over this reprehensible and horrific act. This is an act of terrorism in every respect."Thousands of people joined political leaders and President Reuven Rivlin at rallies in Jerusalem, Tel Aviv and Haifa Saturday night to condemn violence in Israeli society, including the Duma attack, as well as the stabbing attack at Jerusalem’s annual gay pride parade on Thursday. Tovah Lazaroff contributed to this report.