Despite Ankara-Jerusalem reset, military ties continue to be low key

As close allies, Turkey provided Israel with intelligence on Iran. 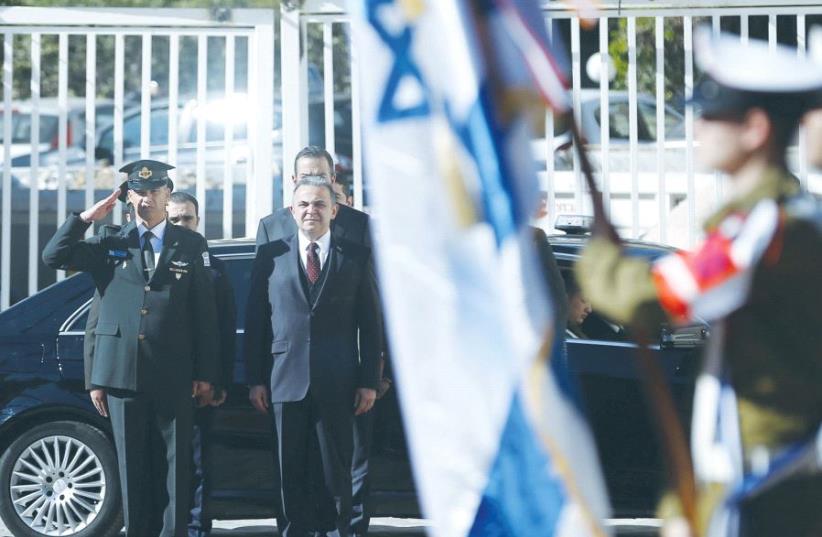 TURKISH AMBASSADOR Kemal Okem stands at attention for the Turkish national anthem before presenting his credentials to President Reuven Rivlin on December 12, 2016.
(photo credit: REUTERS)
Advertisement
Ties between Israel and Turkey’s military are likely to remain chilly for the near future, despite a continued warming in diplomatic ties between Jerusalem and Ankara, a leading expert on Turkey told The Jerusalem Post.“Ankara does not want to be seen as being too pro-Israel,” said Hay Eytan Cohen Yanarocak, a Turkey analyst at Tel Aviv University’s Moshe Dayan Center for Middle Eastern and African Studies.Turkey and Israel normalized ties last year after a six-year rupture, when Ankara broke off relations with Jerusalem following a raid by Israeli commandos on a Gaza-bound Turkish ship, the Mavi Marmara, trying to break the naval blockade of the Hamas-run enclave. Ten pro-Palestinian Turks were killed after they attacked the commandos.Both countries have posted ambassadors in the respective countries, with Eitan Naeh arriving in Ankara in December and Kemal Okem arriving in Tel Aviv.Foreign Ministry director-general Yuval Rotem met with his Turkish counterpart, Umit Yalcin, at the beginning of February in Ankara.
Turkish ambassador to Israel takes up post, in reciprocal move
According to Yanarocak, the rapprochement between the two countries is partly driven by Israel’s search for potential customers for its lucrative Mediterranean gas deals and Turkey’s wanting to restore its regional clout.It is also due to Turkish President Recep Tayyip Erdoğan’s pragmatism regarding regional security issues such as the war in Syria, the impact on Turkish-Russian ties following the downing of a Russian jet over Syria in December 2015, the continued threat posed by the Islamic State group and the change in the White House – all of which have led Erdogan to turn his back to Jerusalem, Yanarocak told the Post.But while senior officials may be growing closer, the Turkish military sees the IDF as a rival, not as the ally they had once counted on.Turkey and Israel had been close allies in the defense industry, security cooperation, intelligence sharing and military training beginning in the 1960s and peaking in the 1990s, with the 1994 Defense Cooperation Agreement and 1996 Military Training Cooperation Agreement.With those two agreements, the military- security ties became one of the closest in the Middle East, with Israel even providing intelligence to Turkey in its ongoing fight against the Kurdistan Workers’ Party (PKK) and Ankara cooperating with Israel on Iran by providing intelligence it had gathered.The two countries also used to participate in annual joint navy and air force drills, but following the downgrading of ties Jerusalem turned instead to Turkey’s adversaries, Greece and the Greek Cypriots, instead for military exercises of air, sea, and ground forces.In addition, Turkey used to be one of Israel’s primary arms customers, with Israeli firms upgrading Turkish M-60 tanks at a cost of $650 million and F-4E warplanes for an estimated $1 billion, as well as supplying Turkey with armed Heron drones for $200 million, electronic reconnaissance and surveillance systems at $200 million and advanced missile systems and smart ammunition for $150 million.Following the Mavi Marmara crisis, Ankara froze all defense industry projects and military cooperation with Jerusalem. According to Yanarocak, Israel is eager to once again sign weapons deals with Turkey, but Jerusalem is wary about revealing any new technology to the Turkish military.After the breakdown of ties, Turkey also exerted efforts to isolate Jerusalem from military cooperation with NATO .But following the reconciliation deal, Ankara withdrew its longstanding veto against Jerusalem being accepted as a partner nation to the organization (but not a member).That move also allowed the first meeting between senior military officials to occur between IDF Deputy Chief of Staff Maj.-Gen. Yair Golan and his Turkish counterpart, Gen. Hulusi Akar, on the sidelines of a NATO conference for defense heads in January in Brussels.Nonetheless, during a January visit by US Navy Adm. Michelle Howard, who commands the US Sixth Fleet as well as NATO ’s Naples, Italy-based Joint Force Command, Capt. Assaf Boneh, head of the Israel Navy’s international coordination branch, said that “Maybe in the future, we’ll be able to see here Turkish ships in Haifa Port for mutual exercises as we have in the past.”According to Yanarocak, the best way to measure the warming of ties is in the mainstream Turkish press, which he says ignores Israel unless the IDF is firing on Gaza. He added that, unless meetings between senior officials are on the front page, “Until then I am not buying their sincerity.“While there have been several trust-building steps between the two countries, neither side currently fully trusts each other” he said, pointing to a 2014 PEW study which found Israel to be one of the most hated countries in Turkey.“There must be more senior bilateral visits to show the ordinary citizens of Turkey of the diplomatic rapprochement before any serious military rapprochement can happen,” Yanarocak said, stressing that “Turkish soldiers need to see Israeli soldiers as allies once again.”