Despite the controversy, the speech went on without interruption, although a small group of protesters had reportedly gathered outside the theater. 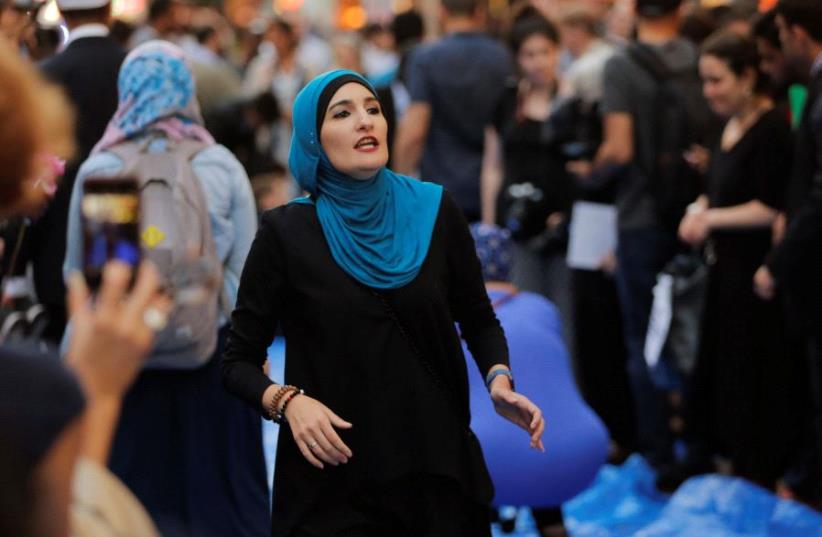 Activist Linda Sarsour prepares for the beginning of a demonstration and Iftar celebration during Ramadan outside of Trump Tower in New York, U.S., June 1, 2017
(photo credit: REUTERS)
Advertisement
NEW YORK – After months of opposition, pro-Israel groups and politicians lost the battle against anti-Israel activist Linda Sarsour, who finally gave her speech at a City University of New York graduation on Thursday evening.Much controversy was sparked since the announcement in April of Sarsour’s participation. Jewish leaders called on CUNY and state officials to rescind her invitation, citing her problematic rhetoric, especially relating to Israel. In an interview conducted in March, Sarsour said one cannot be part of the feminist movement unless he or she is critical of Israel’s “occupation” of the West Bank. Back in April, she publicly supported a convicted Palestinian terrorist, Rasmea Odeh.“We made it. I made it here, and you already know it’s been a more than memorable and eventful experience for me, and I’m still standing and still unapologetically Muslim-American, Palestinian-American and from Brooklyn, New York!” she shouted raising her fist in the air.Sarsour, who spoke at Harlem’s Apollo Theater where the event was held, told graduates of the School of Public Health class of 2017 that she “came here to tell it like it is.“I am here tonight during the holy month of Ramadan,” she said. “This is a month of contemplation and reflection, increase in spirituality, closeness to God and charity.
Linda Sarsour speaks at a New York women"s rally on March 8, 2017 (credit: REUTERS)
“We in this room together must commit to never being bystanders to poverty, lack of jobs in healthcare, sexism and violence, discrimination, racism, xenophobia, Islamophobia, antisemitism and homophobia,” she added. “Public health to me means the mental emotional and physical well-being of whole communities. The only way to do this is to organize intersectionality and holistically.”In her speech, Sarsour said she loved the United States for giving her “Palestinian immigrant parents who lived under military occupation the opportunities to give [her] and [her] siblings a better life,” but will also push it to “become a better nation, to stand up to its original ideals.“I truly believe that dissent is the highest form of patriotism,” she said. “We are in this together. You can always count on your Palestinian Muslim-American sister from Brooklyn, New York, to keep her voice loud in the name of justice for all.”Despite the controversy, the speech went without interruption, although a small group of protesters was gathered outside the theater.New York Assemblyman Dov Hikind, who had been behind most of the struggle to cancel the speech and had organized protests against it, released a final statement on the issue on Thursday stressing that contrary to what his critics had suggested, “the dispute regarding Linda Sarsour being chosen as a commencement speaker at CUNY was never about freedom of speech.“It was about imposing a speaker on CUNY’s graduating students and legitimizing someone who has a record of supporting violence and terrorism,” he said. “Could CUNY not have made a better choice?” Hikind cited Sarsour’s support for stoning attacks on Israelis, which she called an “act of courage,” and her support for convicted terrorists.“After seven weeks of working to underscore Sarsour’s public statements, I am amazed by the double standard that exists with this individual and bewildered by the refusal of so many decent people to judge her on her full record,” Hikind said. “Regardless, I will remain vigilant and will continue to hold Sarsour responsible for her support of violence and terrorism.”