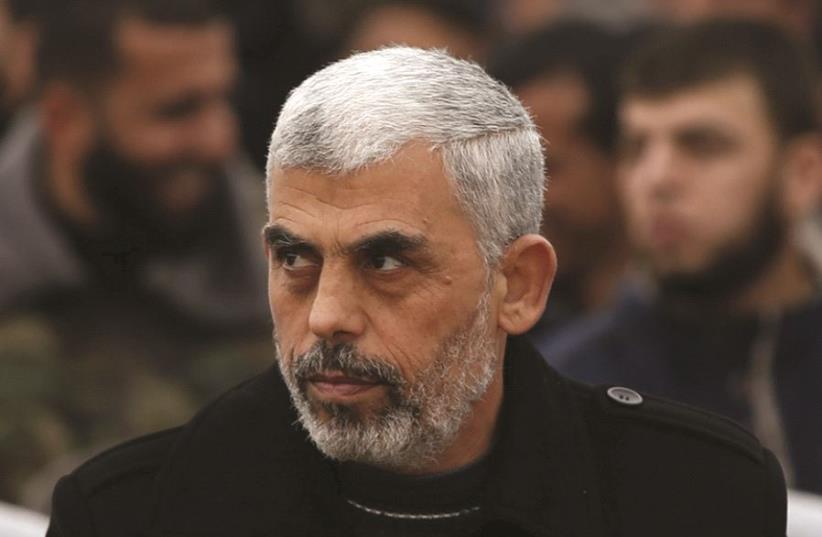 Le nouveau leader du Hamas, Yahya Sinwar
(photo credit: REUTERS)
Advertisement
Hamas leader Yahya Sinwar claimed on Thursday that the organization accepted an Egyptian proposal for an Israeli-Hamas prison swap. In an meeting with Palestinian youth, Sinwar said that "the ball is in Israel's court".Palestinian newspaper Al-Quds revealed details of the proposed three-stage deal. Israel would hand over 39 bodies of Hamas members and other persons. In return, Hamas would provide Israel with information regarding Israeli prisoners and missing persons now believed to be held by Hamas in Gaza. The third step would be Israel releasing Palestinian prisoners it had released after the Gilad Schalit prisoners-swap of 2011, but subsequently re-arrested. The bodies of IDF soldiers Hadar Goldin and Oron Shaul are believed to be held by Hamas, Goldin was killed in the 2014 battle of Rafah and Shaul was killed in the Battle of Shuja'iyya of the same year.  It is also believed that Hamas is holding Israeli citizens Abera Mengistu, who is of Ethiopian heritage, and Hisham Abu-Sayid who is a Bedouin-Israeli. Both men were described by their families as suffering from mental illnesses and it is still unclear how they ended up in Gaza to begin with.Ehud Yaari of channel 2 news reported that the negotiations in Cairo were led by Major General Khaled Fawzy, director of the Egyptian Intelligence Directorate (EGID). Yaari also stated that the deal is only one element in a much larger process the Egyptians are working on, the reconciliation between the PLO and Hamas. During the Thursday meeting Sinwar supposedly said that Hamas will not disarm due to this process, instead it will merge with other Palestinian groups to create a unified Palestinian army. Unnamed Israeli political sources were quoted in a report by Haaretz  as saying that this is nothing but a "cynical attempt" at manipulation by Hamas. During the Gilad Schalit prison swap of 2011 1,027 Palestinian prisoners were released to ensure the release of the Israeli-French former IDF soldier. Schalit was captured in 2006 and released in 2011, that deal also involved Egyptian intelligence and he was taken from Gaza to Cairo before being returned to Israel.