Every terrorist attack that took place in the area has sent visceral shockwaves through the collective Israeli psyche. 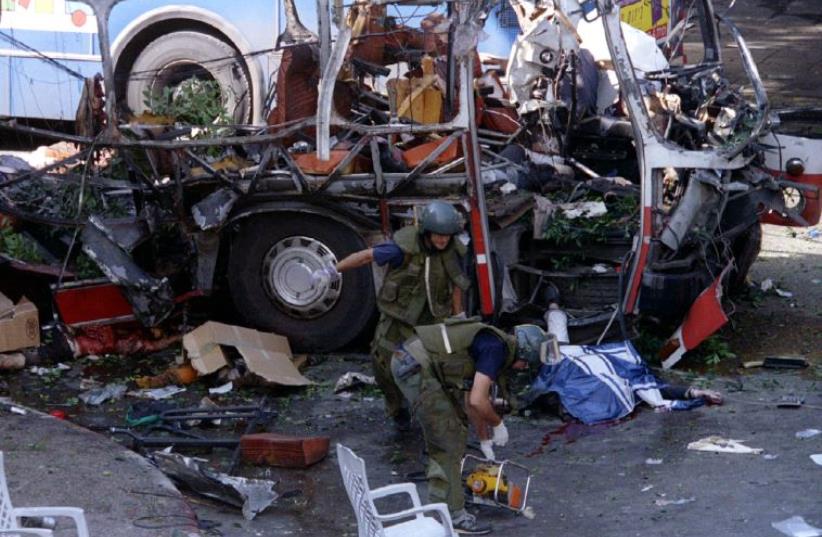 Police sappers looking for additional bombs prepare their equipment next to the covered body, lying on the street by the bus door, of one of the 22 victims from the large explosion that ripped apart a Tel Aviv bus
(photo credit: REUTERS)
Advertisement
Dizengoff Street, the thoroughfare that runs through the heart of central Tel Aviv, has always been considered the key cultural and economic bloodline of Israel's most cosmopolitan city.That may explain why every terrorist attack that took place there sent such visceral shockwaves through the collective Israeli psyche.At approximately 9:00 in the morning of October 19, 1994, a suicide bomber blew himself up on the No. 5 bus line as it pulled up to a station just north of Dizengoff Square, not far from the corner of Dizengoff and Esther Hamalka Streets. This was during the initial stages of the wave of suicide attacks that would be perpetrated against the backdrop of the recently consummated Oslo Accords between Israel and the Palestine Liberation Organization.
Twenty-three people were killed and 104 were wounded in the attack. The suicide bomber was wearing a device that held 20 kilograms of explosives. A plaque commemorating the attack and honoring the victims stands near the site of the attack.Another horrific terrorist atrocity took place on Dizengoff Street less than two years later. On March 4, 1996, a suicide bomber, who just moments earlier was denied entry into the Dizengoff Center mall, wandered onto a crowded crosswalk on the corner of Dizengoff and King George Streets and detonated his explosive device, killing 13 people and wounding 125. The assailant was also carrying explosive weighing up to 20 kilograms.Palestinian terror would strike again not far from there. On March 21, 1997, a suicide bomber blew himself up at the entrance to a café on the corner of Ben-Gurion Boulevard and Adam Hacohen Street. Three young women were killed in the attack and 48 others were wounded. Tel Aviv has witnessed gruesome terrorist attacks, the deadliest of which was the June 2001 suicide attack on the beachfront Dolphinarium night club frequented primarily by youngsters whose families immigrated from the former Soviet Union. Twenty-one people were killed and 120 were wounded.During the current wave of Arab violence, two attacks have taken place in Tel Aviv. On October 9, four people were wounded in a stabbing attack on Menachem Begin Boulevard. The assailant was shot and killed at the scene.On November 19, two people were killed by a Palestinian stabber in the Panorama office building in south Tel Aviv. The assailant was arrested and indicted on murder charges.