"This is not our way" said the leader of Druse community in Israel, while a Druse MK claimed that his community would not "attack or harm even a fly." 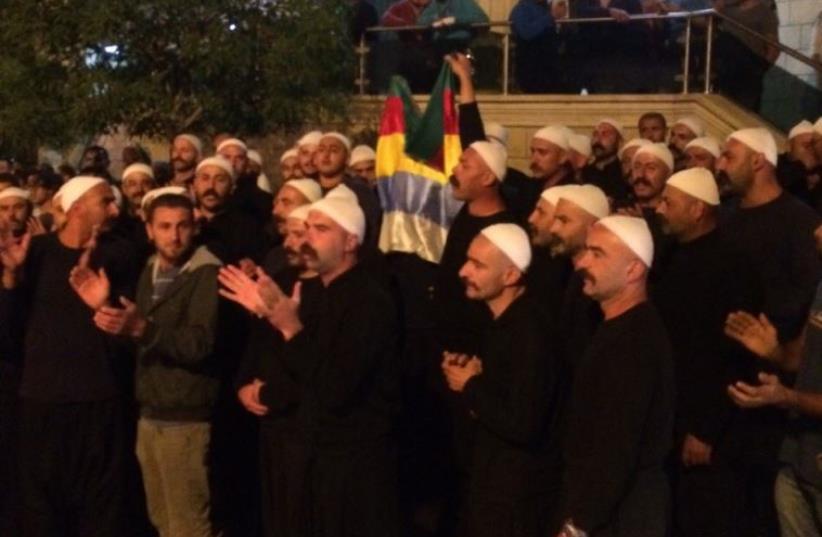 Druse rally in Majdal Shams after a IDF ambulance carrying injured Syrians was ambushed by Druse
(photo credit: SHLOMO MOR)
Advertisement
Hours after a mob in the Golan Druse community of  Majdal Sham killed a Syrian national who was being transported  by IDF ambulance, the community's leaders emerged with calls for cooler heads. Druse MK Ayoub Kara [Likud] addressed  his coreligionists, calling on them to "come to their senses.""We are not a community who its befits to attack or harm even a fly," Kara said.Sheik Mawfik Tarif, the religious leader of the Druse community in Israel, also condemned the attack  in the harshest possible terms."This is not our way," Mawfik said, adding that "we feel the pain of what happened, a criminal act, carries out by lawless people." According to initial police investigations, an angry mob attacked the vehicle and its occupants by throwing stones and causing extensive damage. A similar incident occurred earlier on Monday when a group of Druse near the village of Hurfeish, in the upper Galilee, stopped  an ambulance and attempted to search it for jihadi rebels. Druse figures have accuse Israel of aiding Jabhat al- Nusra, al-Qaida's Syrian branch, by providing medical care to its fighters injured in the Golan Heights. The IDF maintains that their policy is to provide medical assistance solely to non-combatants and only to moderate rebel fighters. Israeli Druse have rallied repeatedly in support of their coreligionists in Syria and have begun collecting donations for that are meant to reach the other side of the Syrian border by way of Jordan.Some Israeli Druse have even called for armed support for their Syrian counterparts. Kara, speaking earlier this month at press conference in Israel’s largest Druse town of Daliat al-Carmel, told foreign journalists that “The Druse do not need soldiers, because they have many volunteers, even though their numbers are small. They need weapons," Kara had said