East Jerusalem resident indicted over membership of a terrorist organization 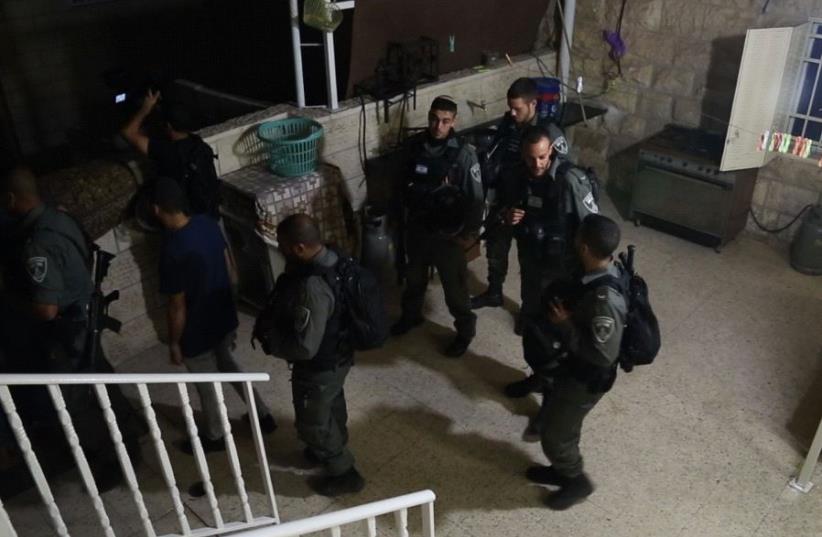 Police operations in Arab neighborhoods in Jerusalem. 03/08/2017
(photo credit: COURTESY ISRAEL POLICE)
Advertisement
Rami Fahouri, a 26-yearold east Jerusalem resident, was indicted by the Jerusalem District prosecution on Thursday for being a member of the Shabab al-Aksa terrorist group.The organization was outlawed in August 2011, and in November 2016, it was declared by Defense Minister Avigdor Liberman to be a terrorist organization.Shabab al-Aksa is a religious organization and is seen as Hamas’s long-arm at the Temple Mount. According to the indictment, members of the organizations were active in violent clashes with police and visitors on the Mount in recent years.Fahouri is suspected of being party of the organization’s WhatsApp group, in which he and his friends were updating the members on Jews entering the Temple Mount compound.Recently the Jerusalem District prosecution indicted 13 other members of the organization, some of whom were involved in conspiring to commit violent activities against security personnel and Temple Mount visitors.The prosecution asked the court to keep Fahouri in detention until the end of his trial.The indictment comes after a joint effort of the Shin Bet (Israel Security Agency) and the Israel Police in tracking down and investigating Shabab al-Aksa activity in the capital’s Old City.During the investigation it was suspected the Hamas members were trying to transfer money into Israel.Their motives are still unclear.One woman, also a resident of the Old City, who is known for her activities in the Murabitat movement, was arrested during the investigation.Police said their goal is to prevent the presence of terrorist organizations inside the country.“The arrested suspect [Fahouri] was a dominant member of an organization that was declared as a terrorist organization. The police is maintain its efforts – in cooperation with the Shin Bet – to prevent terrorist organization forum operating in Jerusalem,” the police said.Last month a Hamas funding apparatus which transferred money to families of Hamas terrorists in Jerusalem was exposed in a joint operation with the Israel Police and the Shin Bet.During the operation some NIS 130,000 that was transferred to families was seized.