Students were asked to put together memorial projects for the deceased "shahids." The projects featured photos from funeral and songs glorifying the terrorists. 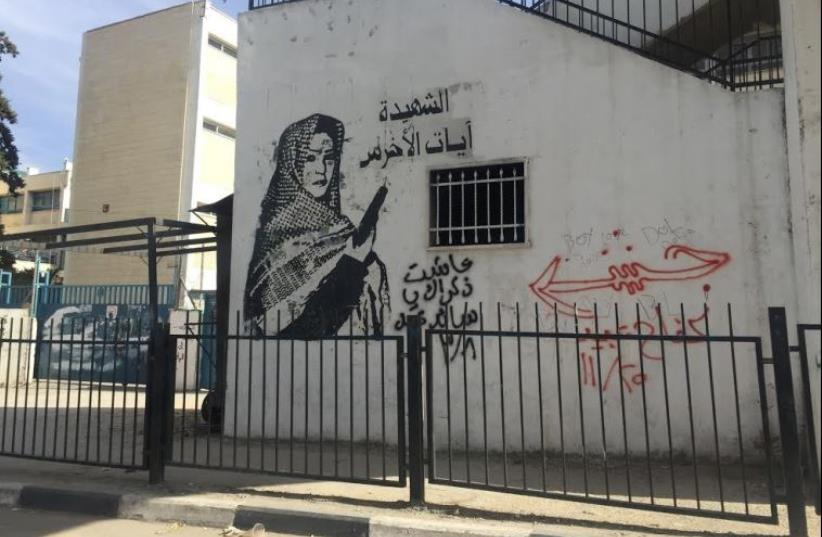 Graffiti on a wall in Bethlehem commemorating a female 'martyr'
(photo credit: SETH J. FRANTZMAN)
Advertisement
The Education Ministry filed a police complaint against an east Jerusalem school, according to Im Tirtzu.The ministry claims the school, which is operated and funded by the Jerusalem Islamic Waqf, has been inciting violence and recently celebrated "Palestinian Shahid (martyr) Day."Students were asked to put together memorial projects for the deceased "shahids." The projects featured photos from funeral and songs glorifying the terrorists.One of the projects focused on the history of martyrdom, and specifically Izz ad-Din al-Qassam, who the Hamas terrorist group is named after. It also glorified other terrorists who died as a "shahid.""We will not permit an educational institution to incite against Israel and to encourage violence," said Education Minister Yoav Gallant. "I will make sure that such institutions are held accountable by the law, even if they are not under the purview of the Education Ministry."Maor Zemach, head of the Lach Yerushalayim group welcomed the decision and ask Gallant to "implement a supervising mechanism that will oversee the curriculum of all schools in East Jerusalem. It is inconceivable that in Jerusalem, Israel's capital, there are students commemorating terrorists."Im Tirtzu also laid out comments surrounding the Education Ministry's decision to turn the school in.