Egypt: Israel must not take action against Hamas leaders during negotiations 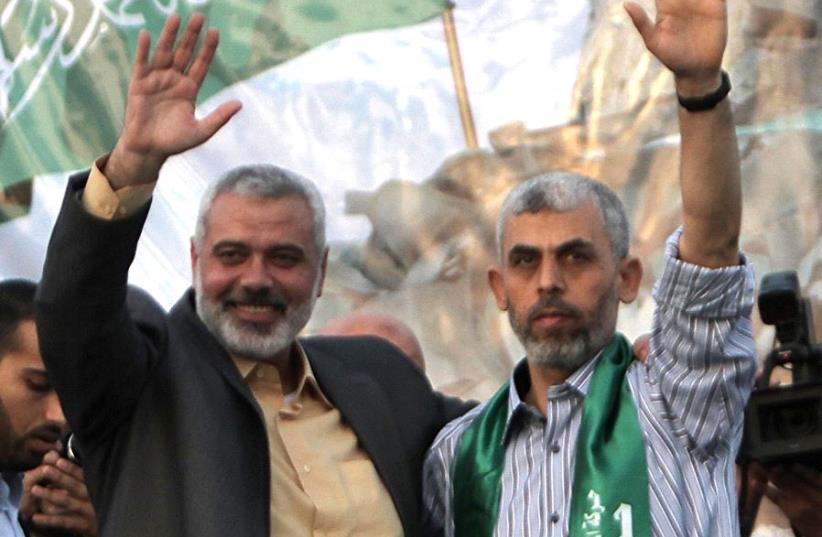 Ismail Haniyeh (L) and Yahya Sinwar (R)
(photo credit: SAID KHATIB / AFP)
Advertisement
Details of Egypt's program for Hamas-Fatah reconciliation were presented on Tuesday to Israeli officials in Jerusalem by Major General Khaled Fawzy, the director of the Egyptian General Intelligence Directorate, Saudi news site Elaph reported.The Egyptian program includes the Palestinian Authority's complete control of the Gaza Strip, including a monopoly on weapons which will be closely monitored by Egyptian security.The first step to this will be Hamas handing over their weapons to the PA security forces, a high-level Egyptian official stated.A high-level Israeli official said that during the meeting Fawzy requested Israel not take action against top Hamas leaders such as Ismail Haniyeh and Yahya Sinwar, as they are working alongside the Egyptians to ensure this program will be successful.
PA Prime Minister Rami Hamdallah holds cabinet meeting in Gaza, October 3, 2017. (Reuters)
Fawzy listened to the Israeli demands in return, which included that Hamas's recognition of Israel and that they honor previous agreements.The Israeli official claimed Israel is willing to allow some time to pass until Hamas disarms.