In an interview with Egyptian media on Thursday, Israeli envoy Haim Koren said that Egypt's national squad was welcome to play a friendly match against the Israeli team in Israel. 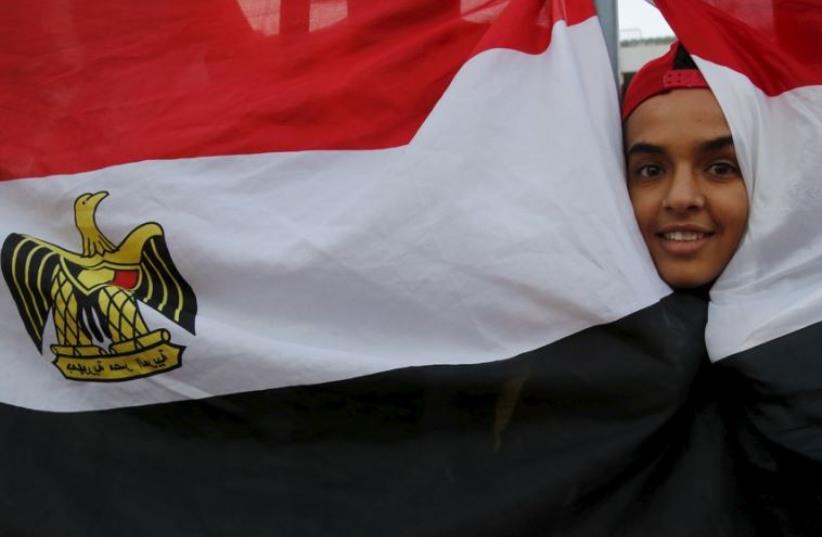 An Egyptian fan cheers behind the national flag before 2018 World Cup qualifying soccer match against Chad
(photo credit: REUTERS)
Advertisement
A senior Egyptian soccer official has ruled out the possibility of Egypt's national team playing a friendly match in Israel.Army Radio reported on Friday that Ehab Leheta, a board member of the Egypt Football Association, shot down an invitation from Israel's ambassador to Cairo, Haim Koren.In an interview with Egyptian media on Thursday, Koren said that Egypt's national squad was welcome to play a friendly match against the Israeli team in Israel.Once Israel's largest and fiercest enemy, Egypt signed a peace treaty with Jerusalem in 1979, formally ending their state of war. Nonetheless, normalized relations with Israel is frowned upon in Egypt."That won't happen, even if heaven falls on the earth," the Egyptian official is quoted as saying by Army Radio.Leheta's remarks stand in stark contrast to a comment made last month by another Egyptian soccer official who said there was nothing preventing a friendly competition between the two national teams.Koren's tenure as ambassador to Cairo has been an eventful one, particularly in the past few days.The Egyptian lawmaker who was removed from parliament for warmly meeting the Israeli ambassador has apologized for his actions.An Egyptian television station aired footage of Tawfiq Okasha pleading with parliament officials to allow him to enter the plenum in Cairo just days after he was stripped of his status due to his publicized get-together with Koren.Following his meeting with Koren, Okasha was ousted from his position on Wednesday, in a decision made by two thirds of Egyptian lawmakers.  Okasha was removed from office on the grounds that his meeting with Koren damaged relations with neighboring nations and that it infringed upon the established parliamentary policy which opposes normalization of relations with Israel.The vote came three days after Okasha was accosted in parliament when another lawmaker hurled a shoe at him and demanded he be suspended from parliament for his misconduct.Okasha sparked controversy in Egypt when he extended an invitation to Koren during his TV show "Egypt Today." He announced in the broadcast: "I have personally invited the Israeli ambassador to Cairo, Haim Koren, to a dinner at my house next week to discuss the Nile dispute and other important issues." Among the reasons for removing Okasha from parliament were that he "had lost the trust of the Egyptians and especially the trust of his voters and that his act showed disrespect for the blood of Egyptian and Arab martyrs." Okasha tried to get into the session to apologize to colleagues before it was too late but was barred by security on the orders of the speaker.