The Netanyahu government would not allow PA elections in east Jerusalem and the Palestinians would not go forward with a vote without them. 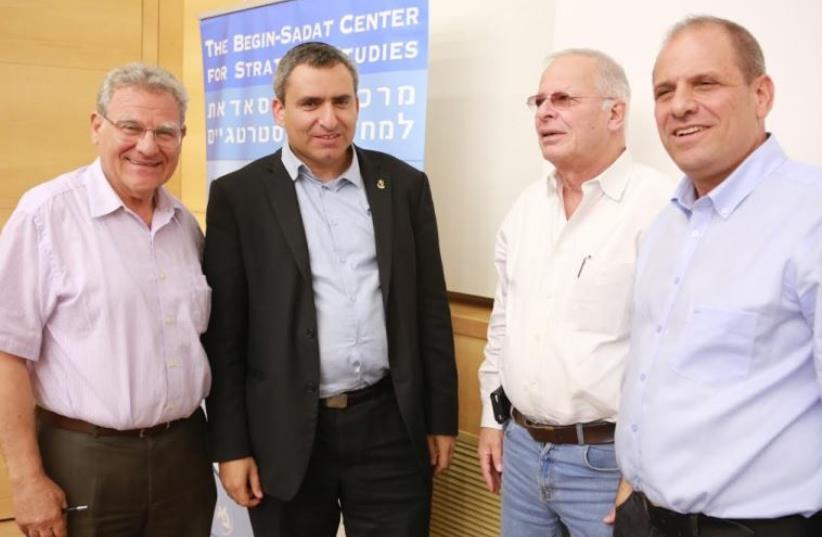 From left: Efraim Inbar, Jerusalem Affairs Ministe Ze'ev Elkin, Ehud Yaari, Maj.-Gen. (res.) Eitan Dangot
(photo credit: YONI REIF)
Advertisement
At a conference Wednesday on “The Day After Abbas,” Jerusalem Affairs Minister Ze’ev Elkin played down Israel’s ability to influence the successor to the Palestinian Authority presidency, saying that Israel cannot shape the Middle East to its will.Israeli politicians, former IDF officials, and experts brainstormed at the event at Bar-Ilan University’s Begin-Sadat Center for Strategic Studies (the BESA Center) in Ramat Gan on what will happen to the PA after President Mahmoud Abbas is gone.“Everyone [in the intentional community] worries about how to strengthen Abbas,” Elkin said, adding that elections are one way for a transfer of power after his rule ends, but he (Elkin) does not see that happening.This is because the Netanyahu government would not allow PA elections in east Jerusalem and the Palestinians would not go forward with a vote without them.Zionist Union MK Amir Peretz warned that “for the Arabs there is time, for us there isn’t,” adding that if the Israeli-Palestinian conflict is not solved politically, “demography will solve it.”Despite the many ideas people are discussing as alternatives to the two-state solution, he continued, “I think two states is the correct solution to pursue.”Peretz said 90 percent of West Bank settlers live in the large blocs.Ehud Yaari, a Middle East commentator for Channel 2 and a Lafer International Fellow at the Washington Institute for Near East Policy, said that the Palestinians tell us they want “runaway statehood without a price and if not we are running away from statehood.”The PA is corrupt and it serves as an agent between international donors and its citizens, he said.Yaari said there is no mechanism in place for passing power after Abbas leaves the scene.Regarding jailed Fatah-Tanzim leader Marwan Barghouti, serving five life sentences for five murders and 40 years imprisonment for an attempted murder, Yaari said he tells visitors that he is going to be the next Palestinian leader. However, Yaari asserted that his popularity on the street is not so high.Jalila Dahlan, the wife of another prospective Abbas successor, former Fatah Gaza strongman Muhammad Dahlan, goes on visits to Gaza hospitals, he noted.Dahlan, a former security chief who is a rival of Abbas and living in exile, is busy trying to build support in the Arab world, in places such as Egypt and Jordan, but the Egyptians do not want to get too involved in internal Palestinian politics, he said.“I don’t think he has the power [to succeed Abbas],” argued Yaari.The Palestinian national movement was created with the rise of Zionism and seeks to destroy Israel, he continued.Maj.-Gen. (res.) Gershon Hacohen of the BESA Center, who served in the IDF for 42 years, said the day after Abbas is gone “we must disassociate from the idea of two states.”“From a security perspective this idea is a potential disaster for the State of Israel,” he added.He argued that if Israel would ever withdraw from the West Bank and return to pre-1967 lines, it would make defending the country more difficult.Lt.-Col. (res.) Dr. Mordechai Kedar, a research associate at the BESA Center, said that people “talk about the Palestinians as if there is one group with one agenda and one will and in one moment they will do what Abu Mazen [Abbas] tells them – this never was and it will never be.”We try to knit solutions for the Palestinians from our Western perspective, but the Palestinian culture is closer to the Arab-Islamic world, he said.Kedar’s plan is for each clan or family that rules each city, for example Hebron or Jenin, to be separate emirates as in the Gulf states.Prof. Efraim Inbar, director of the BESA Center, argued that “the Palestinians are not capable of creating a state,” but can only be expected to keep some control within Palestinian society.“Negotiations won’t bring results,” he said, adding that we all can continue with the charade of peace talks, but “the international community doesn’t want to hear the truth – they don’t understand the Middle East.”In the meantime, Inbar said, the Arabs are trying to build relations with us, because “they don’t trust the Americans to deal with the chaos and security challenges in the region.”He called for “outside of the box” thinking and new paradigms.