Erekat: ‘We’re reporting to the ICC’ on Israeli home demolitions

Erekat spoke in the aftermath of Civil Administration demolitions of seven illegally built Palestinians structures in Area C of the West Bank on Monday. 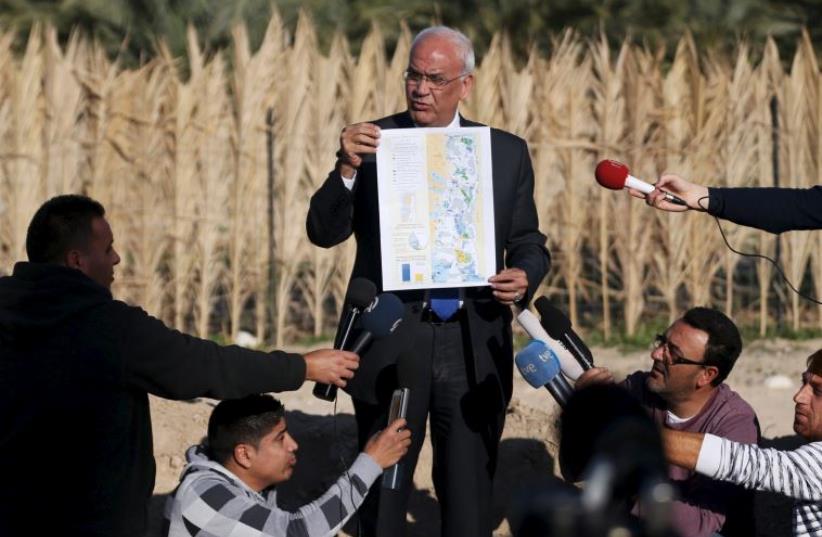 Saeb Erekat, the secretary-general of the Palestine Liberation Organization
(photo credit: TOVAH LAZAROFF)
Advertisement
The Palestinians are reporting to the International Criminal Court on the Israeli demolitions of Palestinian homes and structures, including those in the past 24 hours, PLO Secretary General Saeb Erekat said on Monday.He spoke in the aftermath of Civil Administration demolitions of seven illegally built Palestinians structures in Area C of the West Bank on Monday. The IDF had also razed early in the morning the family homes of the three terrorists who killed policewoman Hadar Cohen in a terror attack outside the Damascus Gate in Jerusalem, February.“Each and every crime Israel commits in violation of our rights are documented, reported, and presented to the relevant international bodies, including the International Criminal Court,” Erekat said.“Granting impunity for continued and systematic Israeli crimes will not achieve a resumption of negotiations, rather, it is killing any realistic political horizon to end the Israeli occupation of the State of Palestine,” Erekat said.The Civil Administration said it had demolished seven illegal Palestinian structures on Monday, three of which were built on the archeological site of Hirbet Marjameh, near the Kochav Yaakov settlement. It added that the structures had damaged the site.Separately, it said, it destroyed two structures and two pens for animals that were illegally built in the Wadi Qelt nature reserve.According to the Jerusalem Periphery Forum, the structures that were demolished in the Wadi Qelt area were built with funding by the European Union.The non-governmental Jerusalem Periphery Forum which is made up of residents from West Bank settlements outside of Jerusalem, said it welcomed the Civil Administration’s actions.Unfortunately, the forum said, the Civil Administration had only taken down what amounted to a drop in the bucket given the large number of illegal Palestinian structures in Area C of the West Bank, many of which are funded by the European Union.It has been particularly concerned about the illegal Palestinian and Beduin structures along Route 1 as it stretches from Jerusalem down to the Dead Sea.It charged that the EU was ignoring Israeli law to help the Palestinian claim the territory along that main artery for what would become a Palestinian “terror state.”The forum called on the Civil Administration and the Defense Ministry to take additional action against that illegal building.The EU on Monday had no response to the demolition of the structures. In the past it has explained that it believes that the funding of such structures fell into the category of humanitarian aid that was permissible under international law.This is not the first time the IDF has removed EU-funded structures in Area C, and Israel and the EU have a constant dialogue on the matter.At a meeting of EU leaders last January, a resolution on the Middle East Peace Process was passed that reiterated the EU’s “strong opposition to Israel’s settlement policy and actions taken in this context, such as building the separation barrier beyond the 1967 line, demolitions and confiscation – including of EU funded projects – evictions, forced transfers including of Bedouins, illegal outposts and restrictions of movement and access.”It is not expected that the EU will release a statement that varies widely from this last one.