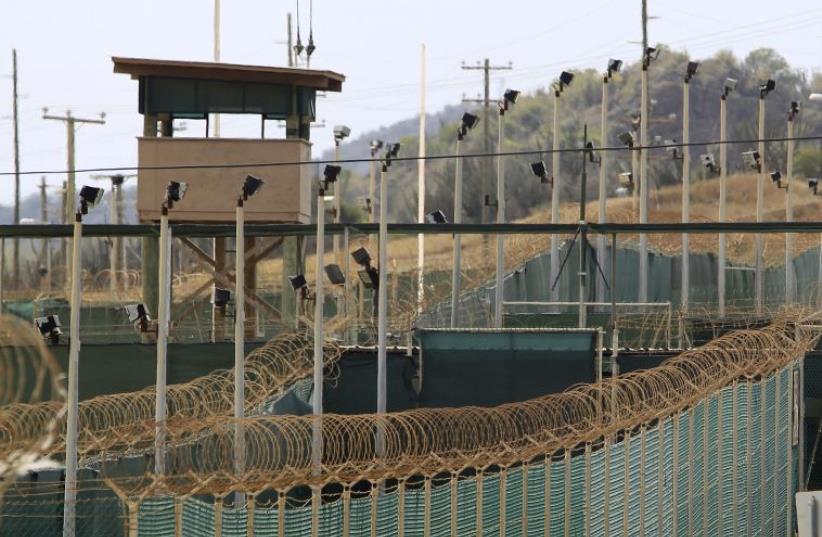 The exterior of Camp Delta is seen at the U.S. Naval Base at Guantanamo Bay, March 6, 2013. The facility is operated by the Joint Task Force Guantanamo and holds prisoners who have been captured in the war in Afghanistan and elsewhere since the September 11, 2001 attacks.
(photo credit: REUTERS)
Advertisement
The man who once served as commander of the United States’ detention center at Guantanamo Bay offered Israel some advice on how to deal with hunger-striking Palestinian prisoner Muhammad Allan, who is in danger of death amid a strike of over 60 days: Forcefeed him immediately.Col. Michael Bumgarner told Aaron Klein Investigative Radio on New York’s AM 970 The Answer and Philadelphia’s NewsTalk 990 AM on Sunday that “Without reservation they should force feed him.”Bumgarner served as commander of the Joint Detention Group – the guard force at the Guantanamo Bay detention center used by the US to house dangerous terrorist suspects – from April 2005 through June 2006.He faced hunger strikes from dozens of prisoners during his tenure at the facility.He argued that if Israel does not force-feed Allan and prisoners like him, “You are going to have a constant breakdown within any of your institutional settings there.”On July 30, the Knesset passed into law the Prevention of Damage by Hunger Strikers bill, which gives authorities the right to forcefeed hunger-striking prisoners. The measure can only be applied if it is approved by the attorney-general and a president of a district court, and a doctor determines that the hunger strike, if continued, would cause irreparable damage to the prisoner or that his life is in danger.Bumgarner argued that the decision to force-feed should be made at a local level, by those immediately in charge of the prison, rather than by involving the courts and the attorney-general.“That decision-making should be pushed down and clearly it should be done as a matter of discipline within your facility. To me it’s a very simple ethical and moral issue.Within Guantanamo we continuously had people attempting to kill themselves. Now, would you allow a man to cut his wrists and just lay out and bleed out?” Bumgarner asked.He said that the decision to implement force-feeding at Guantanamo was taken by then-US secretary of defense Donald Rumsfeld after some 150 prisoners were on hunger strike at the facility.“They had to have lost a rather significant portion of their body percent of fat and that of course was all done by doctors... Daily, we had a forum that would last perhaps two to three hours where I sat with the medical staff and we went through each case file, exactly what is going on, how he is receiving treatment,” he said.Bumgarner said that by not force-feeding prisoners, Israel would be allowing prisoners to dictate the policy of the prison.“That’s exactly what happened at Guantanamo and things got totally out of control. They thought they were influencing national decisions by their behavior... [Israel] should not allow this slippery slope of their behavior being regarded back and forth inside that prison.”