Ex-UN envoy Bolton to JPost: Trump has no chance at ultimate peace deal

In an exclusive interview with the 'Post' the former US Ambassador to the UN John Bolton said: "I don't think the two-state solution is viable anymore." 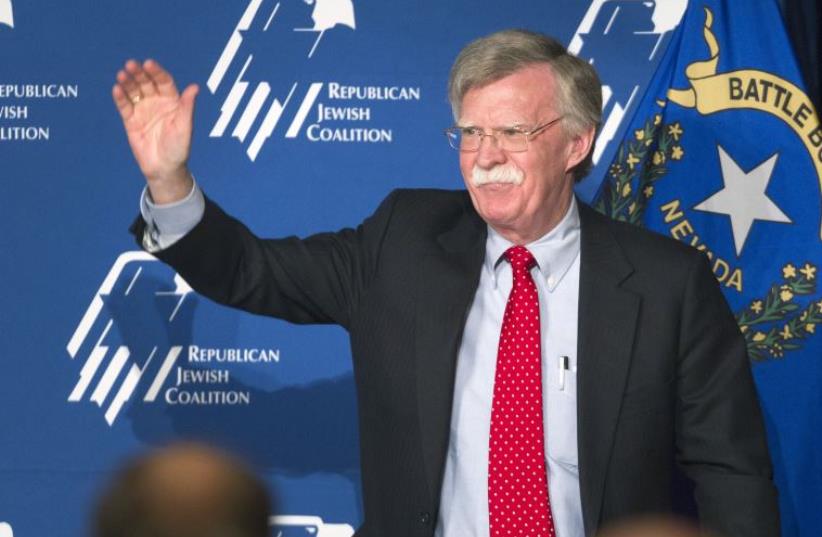 John Bolton, former US ambassador to the United Nations, leaves the stage after speaking on US foreign policy during the Republican Jewish Coalition Spring Leadership Meeting in Las Vegas
(photo credit: REUTERS)
Advertisement
There is no chance President Donald Trump will secure a peace deal between Israel and the Palestinians, former US ambassador to the UN John Bolton told The Jerusalem Post on Monday.Speaking just before he received the Guardian of Zion Award from Bar-Ilan University’s Ingeborg Rennert Center for Jerusalem Studies at the King David Hotel in Jerusalem, Bolton said Trump “is an optimistic man and can take a good shot at it, but I don’t think the conditions exist. I don’t think the two-state solution is viable anymore.”“It is not a question of personality or effort, it is just undoable. There has been a 70-plus year effort for the two-state solution,” which has failed, he said, adding, “You can’t put it back together again.”Bolton said both Hamas and the Palestinian Authority were not viable interlocutors for peace and that any two-state solution would lead to “a terror state or an anarchic state.”Instead, he proposed a threestate solution to include, “giving Gaza to Egypt, dividing up the West Bank – however it would be divided – with those not included in Israel becoming part of Jordan.”The plus for the Palestinians, according to Bolton, would be “two viable economies and a better life day-to-day for Palestinians and their children.”Considering that neither Hamas, Fatah, Jordan, Egypt – nor most of the world – favors such a solution, Bolton said he did not “underestimate the difficulty of a three-state solution. If you want to pursue the two-state solution. Knock it out – it isn’t going to work.”“Few people liked German reunification,” Bolton added.
Trump edges away from two-state solution (credit: REUTERS)
“They got used to the circumstances as they were.”Further, he said Egypt could decide to take responsibility for Gaza “to try to create a stable security and economic situation” by reducing the “threat of the Muslim Brotherhood,” to which Hamas is linked. In other words, Bolton said taking Gaza would make it easier for Egypt to reduce the threat Hamas poses to it.Bolton – who was in Israel to receive the “Guardian of Zion” award for fostering relations between the United States and Israel – said that pending any solution, he saw no reason for Israel to show restraint in building within the West Bank.