Israel Navy's Squadron 916 of fast patrol boats is training for such scenarios, while patrolling Gaza's coast, where Hamas disguises its naval units as fishing boats. 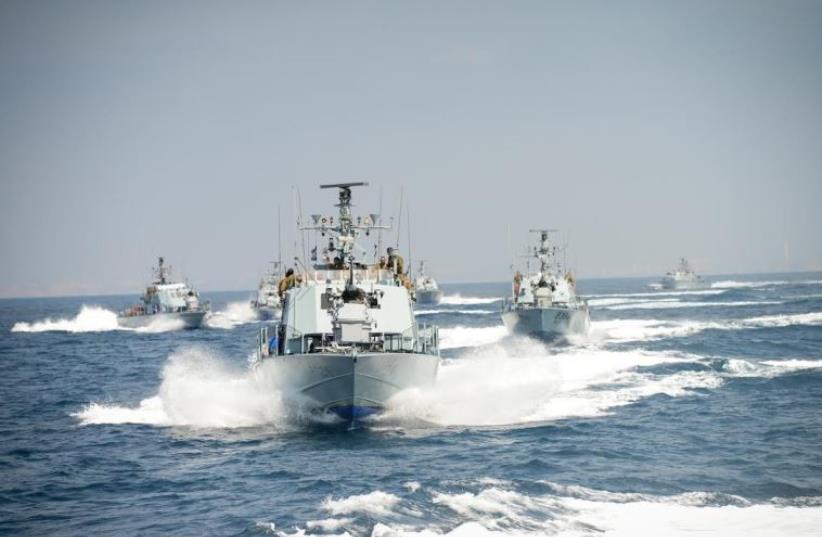 Archive photo of Navy Squadron 916
(photo credit: IDF SPOKESMAN’S UNIT)
Advertisement
Hamas in Gaza has received Iranian operational instructions on how to prepare swarm-like boat attacks, and is preparing such capabilities for clashes with Israel, according to a senior naval source.The Israel Navy’s Squadron 916 of fast patrol boats, tasked with securing the coastline, is training and preparing itself for combat with Hamas, while keeping a close eye on sea movements around the Strip.“Hamas is building up its ability to cause much damage from sea-based attacks,” the navy source told The Jerusalem Post this week.“It is improving its diving commando units, and creating sea forces that are much more capable than they were before. Hamas has received battle doctrines from Iran – which is also building up its sea capabilities – on how to deliver ‘stings’ through swarms,” the source said. “They will try to attack our vessels with swarms.”Hamas’s aim in any future conflict is to cause heavy damage in the opening stage, and achieve a “victory picture, even if all Hamas attackers are killed in the process. From their perspective, if the attack succeeds, they won,” the source said.Squadron 916 has been training various techniques to prevent this. According to the source, Hamas is also expanding its frogman commando unit.The navy has responded by planting more sonar sensors underwater, and practicing a set of fast responses for when suspicious activity has been detected under the waves.A range of new underwater explosive fuses have been amassed on board fast patrol boats in Squadron 916.The squadron is made up Super Dvora MK 3-class fast patrol boats (made at Israel Aerospace Industries’ Ramta plant), older Dvora-class patrol boats, Shaldag-type boats (made by Israel Shipyards), and the light Tzor’a (Wasp) Safe Boats, used mainly for port and coastal defense.

(Archive photo of Navy Squadron 916. Credit: IDF Spokesperson's Unit)According to naval assessments, Hamas will probably soon resume its attempts to smuggle rocket-building materials from Sinai to Gaza via boats, after a pause in such efforts.“The sea is one big blue tunnel,” the source said. “As Egypt continues demolishing tunnels between Sinai and Gaza, we expect an increase in sea smuggling attempts.”Last year, Squadron 916 foiled a number of such efforts.When a smuggling attempt is intercepted, the navy makes every effort to avoid harming the smugglers, out of an understanding that they are often civilians exploited by Hamas, the source said.“We fire in a way that will not kill or wound the smugglers. Often they are fishermen used by Hamas,” he said.The squadron’s fastest boat is the Super Dvora MK 3, which can travel at nearly 90 kilometers an hour, and possesses a turning angle comparable to that of a ski jet.The vessels have Typhoon precision cannon on their bows, an M2 Browning machine gun at their sterns and two MAG machine guns on the decks, as well as Rafael Spike MR fire-and-forget guided missiles.Ten to 12 sailors and technicians are usually on board, with half resting, while the other half is on active duty. In emergencies, they all must reach battle stations in seconds.The squadron’s vessels are linked in to the Ground Forces command and control systems, meaning they can work closely with ground units to strike enemy targets and share intelligence.The squadron secures two offshore natural gas rigs, with the help of the recently arrived Rafael Protector unmanned sea vehicle.The Protector vehicle, with its water cannon, is also used to enforce the 6-nautical-mile fishing zone off the Gazan coast.“The future is here. The Protector can fire, it can monitor,” the source said. “If you had asked me years ago if I thought this would be plausible, I probably would not have believed it.”In between training for battle with Hamas, the squadron’s main task continues to be to prevent terrorist infiltrations from Gaza into Israel. To that end, buffer zones exist around Gaza’s north and south coasts. The squadron closely monitors these areas.“On average, Gaza coastal patrols last 48 hours, though we can stay at sea 96 hours if necessary. We distill seawater, turning it into drinking water. We have plenty of combat food portion storages, and a lot of fuel,” he added.“The sailors here are under orders to be patient and civil to Palestinian fishermen who stray from the 6-mile zone,” the source said. “Most fishermen want to feed their families,” he added.But some are terrorists disguised as fishermen, he said.“We must be aware that every so often there are Hamas operatives, enemies, who are here, disguised as fishermen. This is how they gather intelligence on us.”
Advertisement
Subscribe for our daily newsletter