French FM in Ramallah says he aims to present a number of new ideas to get the Israelis and the Palestinians to return to the negotiating table. 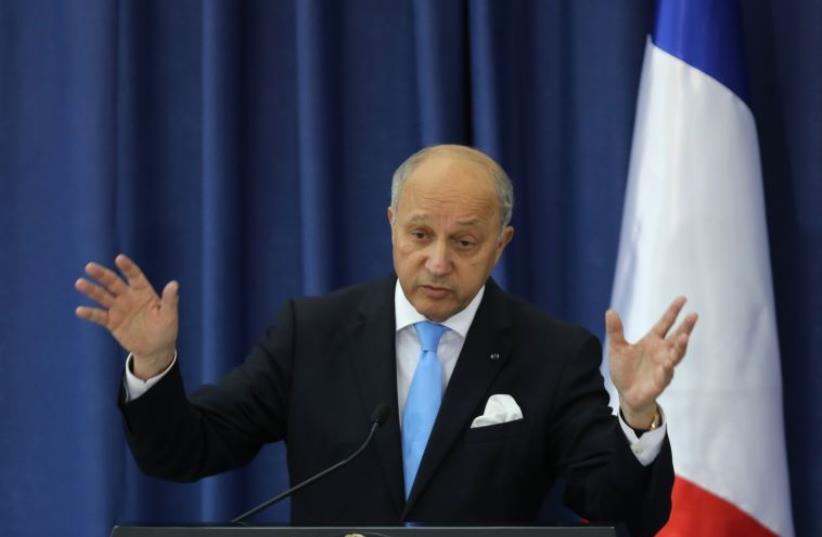 French Foreign Minister Laurent Fabius gestures during a press conference at the Mukataa compound, in the West Bank city of Ramallah, on June 21, 2015.
(photo credit: ABBAS MOMANI / AFP)
Advertisement
Following earlier comments made by Prime Minister Benjamin Netanyahu critical of international efforts to restart the stalled talks between the Israelis and the Palestinians, French Foreign Minister Laurent Fabius urged Israel not to prejudge his efforts and warned of the dangers of a continued stalemate.Fabius is on a two-day visit to the Middle East and made the comments at a news conference in Ramallah. He is set to meet Netanyahu later Sunday evening.  Fabius said the conflict could be "set ablaze" if there was no movement toward peace."The aim is to present a number of ideas and I haven't done that yet, so let's not prejudge," he said, speaking alongside his Palestinian counterpart Riyad al-Maliki.France has so far focused with Arab states on a possible UN Security Council resolution that would set negotiating parameters and establish a time-frame, possibly 18 months, to complete talks.
Netanyahu: Int"l peace proposals are forced on Israel, push it to indefensible borders
Netanyahu said at the weekly cabinet meeting on Sunday that "the only way to reach agreements is through negotiations between the two sides, and we will firmly reject attempts to force international dictates on us".But Fabius responded: "This word 'diktat' is part of neither French vocabulary nor the French proposals." Netanyahu said that international proposals are forced on Israel while not really "addressing Israel's security needs and its other national interests."