The Palestinian faction posted a photo describing the murderer of Taylor Force as a "heroic martyr." 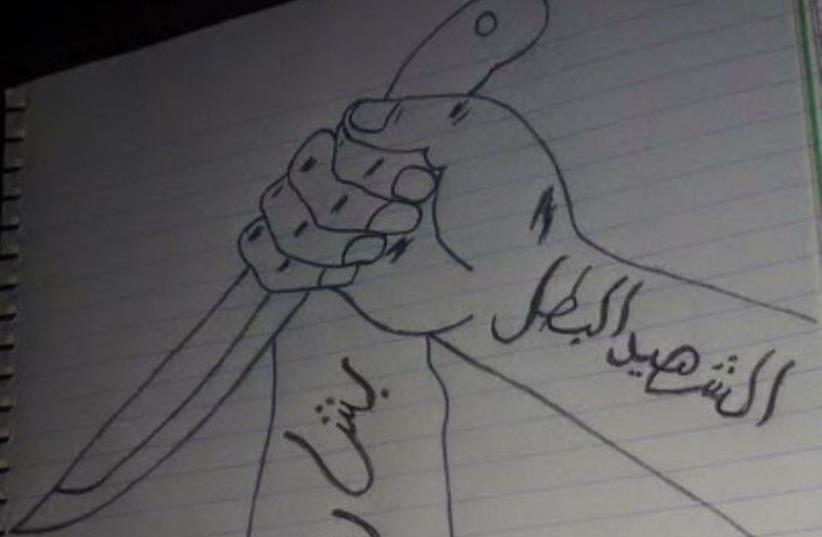 Text on arm: The heroic Martyr (Shahid); Text on map is name of Taylor Force's murderer: Bashar Masalha ‏
(photo credit: PMW - TAKEN FROM OFFICIAL FATAH FACEBOOK PAGE)
Advertisement
Fatah, the largest faction within the PLO, and the party of Palestinian Authority President Mahmoud Abbas,  celebrated the Tuesday murder of an American tourist in Jaffa on its Facebook page, the media watchdog group Palestinian Media Watch has reported. The group posted a hand drawn sketch of a hand gripping a knife over a map of Israel and the Palestinian territories. The text on the arm reads "the heroic martyr," (Shahid in Arabic), and written on the map is the name Bashar Masalha, the murderer of the American Taylor Force. Mashala, a 21-year-old man from Kalkilya, went on a stabbing spree in Tel Aviv-Jaffa on Tuesday night, killing Vanderbilt graduate student Taylor Force, 29, who was visiting Israel, and wounding 12 others.  An anchor on the official Palestinian TV station referred to the American casualty and the other victims as "settlers" and the network also referred to the terrorist as a shahid or, an Islamic martyr, PMW also reported.  Force was a US veteran who had served tours of duty in Iraq and Afghanistan.  The attack occurred  just a short distance away from where visiting Vice President Joe Biden was meeting former president Shimon Peres.   On Wednesday, Prime Minister Benjamin Netanyahu thanked Biden for his strong support and denounced the PA for failing to condemn terror attacks against Israelis. “Unfortunately President Abbas has not only refused to condemn these terrorism attacks. His Fatah party actually portrays the murderer of this American citizen as a Palestinian martyr and a hero. This is wrong. This failure to condemn terrorism should be condemned itself by everyone in the international community,” Netanyahu said.