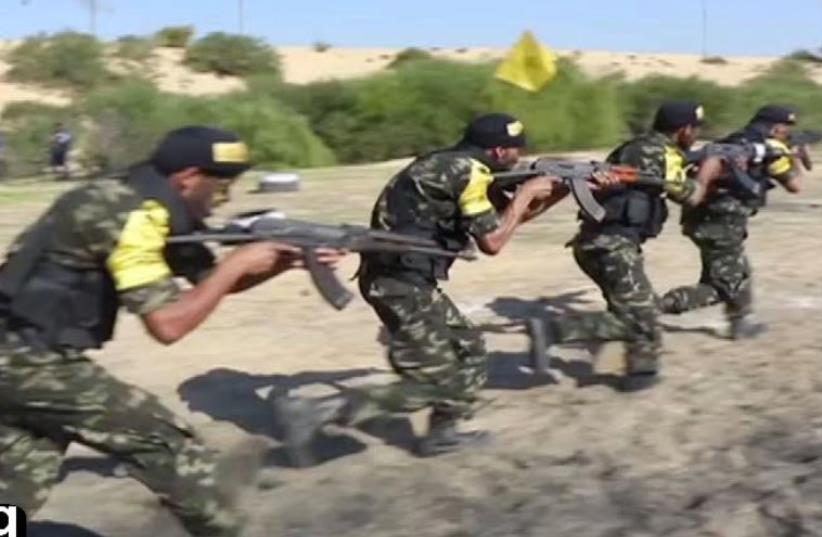 Al-Aksa Martyrs Brigades releases new promotional video
(photo credit: ARAB MEDIA)
Advertisement
A once Fatah affiliated armed Palestinian organization, the al-Aqsa Martyrs Brigade, said on Friday that it was responsible for the two rockets that were fired at Israel from within the Gaza Strip overnight towards the Eshkol Regional Council, located in southern Israel. This is the first time in almost three years that the splinter-group declared that it stood behind an attack targeting Israel, with the last such declaration taking place during the 2014 Israel-Gaza conflict. In the official statement released by the organization, it was stated that two rockets were fired towards the Eshkol Regional Council at around 11:15 p.m., with a clear threat that "the coming days will bring an escalation against the Israeli occupation." Earlier on Thursday night Palestinian media reported that one rocket that was fired from southern Gaza landed within the Strip a short while after it was launched. It was also claimed that the IDF responded to the attack by artillery fire aimed at two neighborhoods in the Gaza Strip: the southern city of Khan Unis and the central city of Deir al-Balah. The reports said that none were injured as a result of the IDF retaliation fire. The attack on Thursday night came less than two weeks after a rocket that was fired at Israel from the Strip landed in an open area in the Hof Ashkelon Regional Council. In that incident, no injuries or damage were reported nor was a red alert activated in the area. Two days prior to that attack, another rocket fell in in open area at the Sh'har Hanegev Regional Council. Here, too, no injuries or damage were reported. The IDF Spokesperson's Unit has said that a red alert was not sounded in this incident because the rocket was launched at an open area, and therefore didn't require the activation of the Iron Dome Missile Defense System.