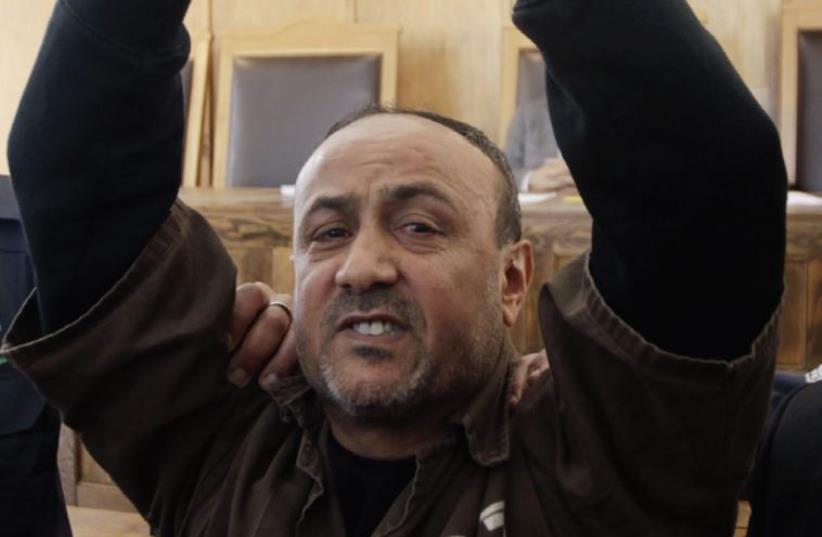 Jailed Fatah leader Marwan Barghouti gestures before a Jerusalem Magistrates’ Court hearing in 2012.
(photo credit: REUTERS)
Advertisement
Thousands of Palestinian prisoners, led by imprisoned Fatah leader Marwan Barghouti, are set to begin a hunger strike in a number of Israeli prisons on Monday.Barghouti and his fellow prisoners are calling on Israel to respond affirmatively to a list of demands, which include: increased family visitation rights, improved medical services, ending administrative detention and greater access to education materials.Barghouti, who was sentenced to five life sentences in 2004, is seen as a major contender to succeed Palestinian Authority President Mahmoud Abbas.An Israel Prison Service spokesman said that prison authorities are not concerned about the forthcoming strike.“If they carry out a hunger strike, they carry out a hunger strike,” the spokesman said.“We will deal with it.”In the past year, several Palestinian administrative detainees, who were being held without charges, carried out hunger strikes before reaching deals with prison authorities to secure their release.The Shabibah, the Fatah student movement, in March announced its solidarity with the Palestinian prisoners, who intend to carry out hunger strikes, and called on Palestinians to take to the streets.“We call on our valiant students and people to escalate the confrontation with the occupier at friction points,” the Shabibah said in a statement on March 29.Palestinian prisoner advocate groups are also organizing a number of events and demonstrations around the Palestinian territories to coincide with the start of the planned hunger strike.