“We have the right to remain in a state of friction with the Israeli enemy so that we could live on this land with dignity,” says Fatah official. 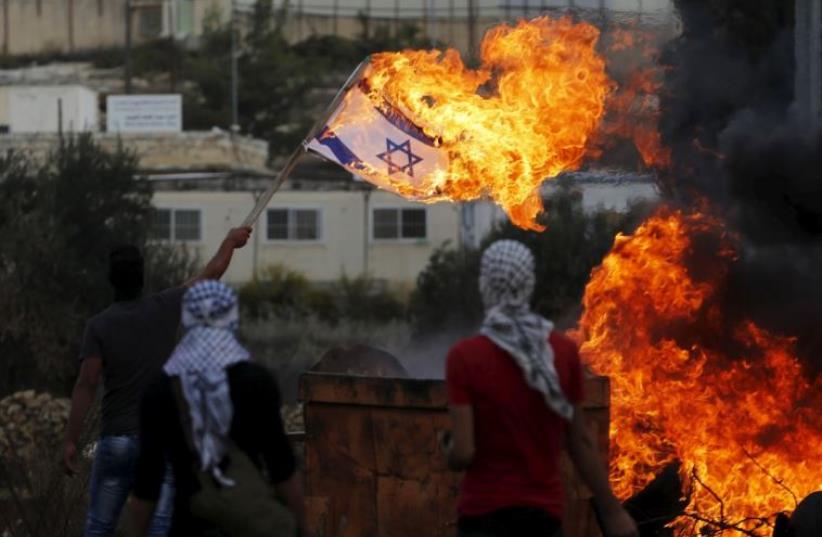 A Palestinian demonstrator sets fire to an Israeli flag near the West Bank settlement of Beit El
(photo credit: REUTERS)
Advertisement
For the second time over the past week, Palestinian Authority policemen on Wednesday prevented Palestinian protesters from marching towards the Beit El Junction north of Ramallah.Wednesday’s protest was organized by Fatah on the occasion of the 51st anniversary of its first attack against Israel.Last Friday, PA policemen used force to disperse dozens of protesters who were also planning to march towards the Beit El Junction and clash with IDF soldiers stationed there.That protest was organized by various “national and Islamic” factions in the Ramallah area.Some of the protesters and journalists accused the policemen of physically assaulting them and called for in investigation. The factions strongly condemned the PA leadership for instructing the security forces to break up the protest.Senior Fatah officials who participated in Wednesday’s protest expressed anger over the PA police crackdown. “We have the right to remain in a state of friction with the Israeli enemy so that we could live on this land with dignity,” said Sultan Abu Eleinien, a top Fatah official in the West Bank. “There is no room for settlements on our Palestinian territories. We are practicing our natural right in accordance with international laws.”Salah Al-Khawaja, one of the leaders of the protest, complained that the decision to prevent Palestinians from clashing with the IDF and marching towards Beit El would deepen divisions among Palestinians.He and other protesters denounced the PA leadership for “assaulting public freedoms, including the freedom of expression.” They urged the PA to reconsider its decision to ban Palestinians from protesting at the Beit El Junction.