Israel Police also announced the arrest a man who allegedly assisted the perpetrator of a near fatal terror attack the previous evening in Netanya, the second of the day. 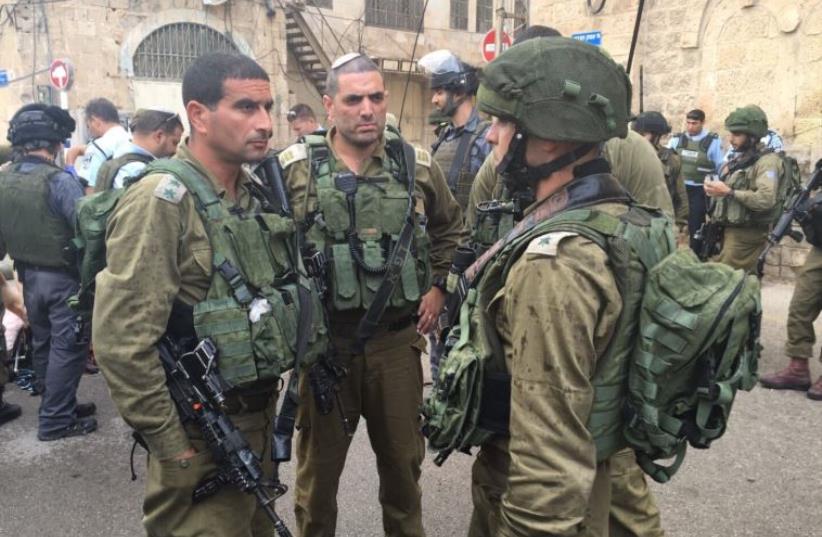 Scene of stabbing attack in Hebron
(photo credit: IDF SPOKESMAN’S UNIT)
Advertisement
A terror attack was thwarted in Hebron Friday morning after a Palestinian female suspect attempted to stab an Israel Border Police officer at the Cave of the Patriarchs.Border police said that the female assailant approached officers stationed at the holy site and suddenly pulled out a knife, attempting to stab at least one guard.Border police officers responded quickly, shooting the alleged suspect and halting her progress. The suspect later died of her wounds. No one else was injured in the event.Meanwhile, Israel Police announced that they arrested a man who allegedly assisted the perpetrator of a near fatal terror attack the previous evening in the central Israeli town of Netanya, the second of the day. Police said that they apprehended a 30-year-old Tel Aviv-Yafo resident who allegedly drove the now deceased assailant to the area of the attack in an overnight raid on his home. On Thursday, a Palestinian terrorist attacked Israeli civilians in the vicinity of Netanya's central market, on the corner of Milkhemet Sheshet ha-Yamim Street (Six Day War Street) and Shoham Street. The assailant, a 40-year old Palestinian male, stabbed and wounded two Israelis before being shot and killed by an armed civilian present at the scene, with security forces arriving in the minutes following the attack. Thursday also saw the brutal murder of 13-year-old Hallel Yaffa Ariel  as she slept in her Kiryat Arba bedroom following the break-in of an Arab terrorist from a nearby Palestinian village who sneaked inside and stabbed her to death.

“The entire world needs to condemn this murder, just as it condemned the terrorist attacks in Orlando and Brussels,” Prime Minister Benjamin Netanyahu said in the wake of the attack. “I expect the Palestinian leadership to clearly and unequivocally condemn this vicious murder and take immediate action to stop the incitement."