“This kind of incitement can cost people’s lives.” 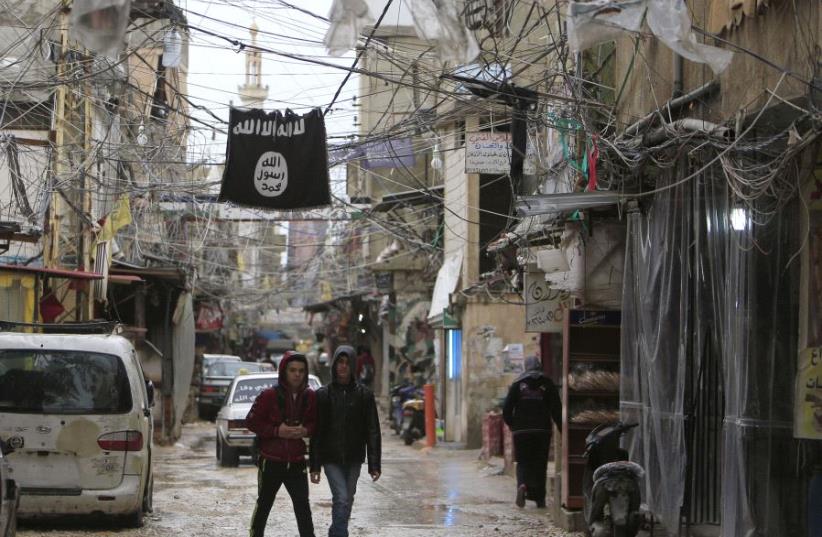 Youth walk under an Islamic State flag in Ain al-Hilweh Palestinian refugee camp, near the port-city of Sidon, southern Lebanon January 19, 2016.
(photo credit: ALI HASHISHO/REUTERS)
Advertisement
The Israel Police has arrested a 40-year-old West Bank resident suspected of incitement, encouraging violence and supporting a terrorist organization.A police statement released on Sunday said the suspect admitted under questioning to being a supporter of Islamic State.The investigation regarding the suspect started several months ago, when the police discovered his Facebook account where he openly expressed his support for ISIS.The suspect distributed videos of the activities of the terrorist organization in different countries, and also videos of executions of those who oppose ISIS.The police statement asserts that the suspect’s social network activity has been going on for over two years and that a large amount of people were exposed to the content he distributed.The suspect is a former resident of Shuafat refugee camp within Jerusalem’s municipal borders and recently moved to Hebron, where he was arrested.In light of the findings of the police investigation, the State Attorney’s Office decided to launch a criminal investigation against the suspect.Police stressed that locating suspects on the Internet, and arresting, investigating and indicting them is yet another move done by them to prevent incitement to violence.“The fact that we found an ISIS supporter inside Israel, and that he lived in Jerusalem until recently, is making his activities even more dangerous,” said a police statement.“The main concern that these kind of [social network] publications raises is that someone will be influenced by them and decide to take action in light of them.“This kind of incitement can cost people’s lives,” the statement added.