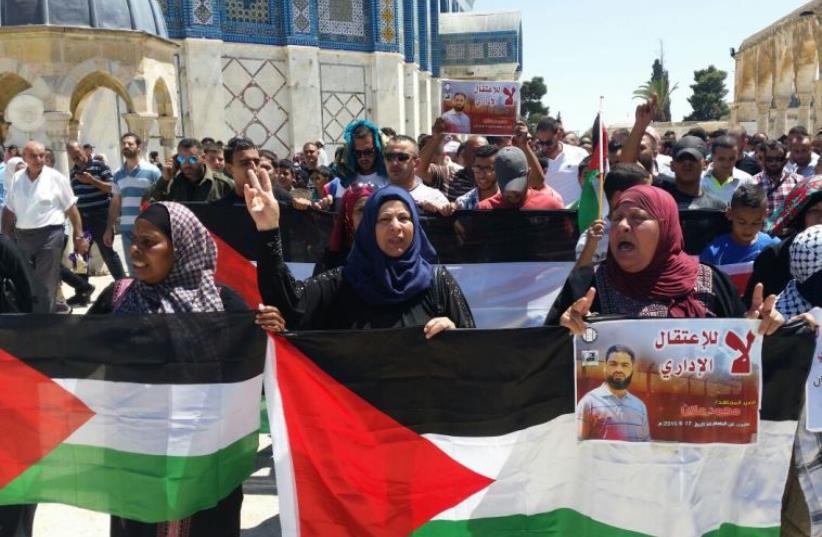 Protest on Temple Mount calling for release of hunger striking Palestinian prisoner Muhammad Allan
(photo credit: SHLOMO MOR)
Advertisement
Even as US ambassador Dan Shapiro made clear in recent days the stifling effect the US Administration believes the proposed NGO transparency law could have on Israel's democracy, one of his predecessors wrote an email to then US Secretary of State Hillary Clinton four years ago advocating the US back – and possibly work through NGOs – to foment non-violent Palestinian protests intended to get the Israeli government to move on the Palestinian issue.The NRG website, which combed the recently released trove of Clinton's e-mails from her personal e-mail server for references regarding Israel, highlighted an e-mail sent from Thomas Pickering to Clinton on December 18, 2011, and which she asked to print for additional clarification.Pickering, a veteran US diplomat who served as Washington's ambassador to Israel under Ronald Reagan from 1985-1988, wrote her with a suggestion on how to jump-start the stymied Israeli-Palestinian negotiations. During his long diplomatic career, Pickering also served as Washington’s ambassador to Jordan, Russia, India and the United Nations. His novel suggestion, “in the spirit of Gandhi,” was to launch a "a major effort to use non-violent protests and demonstrations and protests to put peace back in the center of people's aspirations as well as their thoughts, and use that to influence the political leadership.”“This is far from a sure thing, but far, in my humble view, from hopeless,” he wrote. “Women can and ought to be at the center of these demonstrations.”According to Pickering, the focus needed to be on women demonstrators, because they were less prone than men to resort to violence.“It must be all and only women. Why? On the Palestinian side the male culture is to use force,” he wrote. . “Palestinian men will not for long patiently demonstrate — they will be inclined over time and much too soon to be frustrated and use force. Their male culture comes close to requiring it.”Pickering drew parallels between these proposed demonstrations, and the protests that took place earlier in the year in Cairo's Tahrir Square that eventually unseated Hosni Mubarak.He stressed that the US must be the silent hand behind this, and not be seen in any way as involved.“Most of all the United States, in my view, cannot be seen to have stimulated, encouraged or be the power behind it for reasons you will understand better than anyone,” he wrote. “I believe third parties and a number NGOs [non-government organizations] on both sides would help,” he said, mentioning Peace Now.There is no indication any part of this proposal was acted upon or put into practice. On Monday the US embassy made clear its displeasure with the the so-called NGO transparency Law championed by Justice Minister Ayelet Shaked that would require NGOs that receive half of their funds from foreign governments detail that information and wear special identifying tags in the Knesset.Shapiro met with Shaked on Sunday and expressed the US's reservations to the proposed legislation saying that “a free and functioning civil society is an essential element of a healthy democracy, and that governments must protect free expression and peaceful dissent and create an atmosphere where all voices can be heard.”