Days after arriving in Israel, America's new envoy reportedly says the US is also not making the demand. 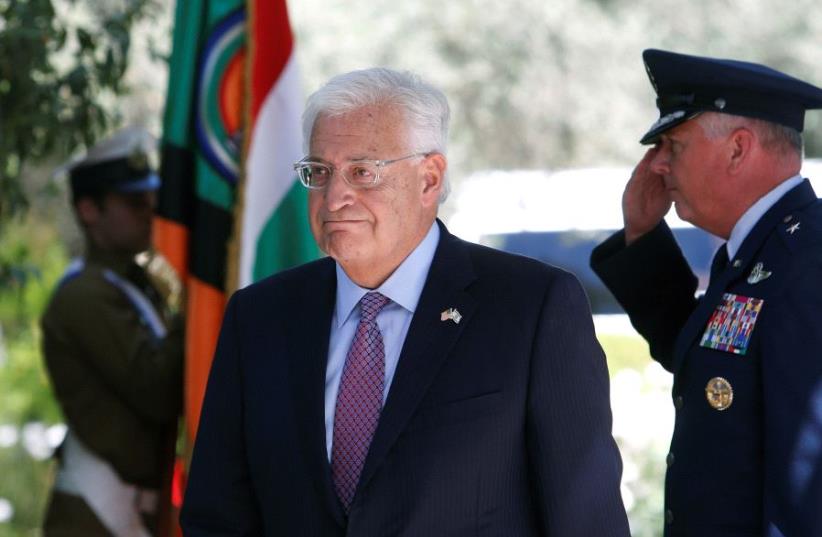 David Friedman (front, C), the newly appointed United States Ambassador to Israel, arrives to a ceremony whereby President Reuven Rivlin will receive Friedman's diplomatic credentials at his residence in Jerusalem May 16, 2017
(photo credit: REUTERS)
Advertisement
The United States has not asked for a settlement freeze and the Palestinians have dropped that demand as a precondition for talks with Israel, America’s new Ambassador David Friedman told the Hebrew daily Yisrael HaYom.“We have no demands for a settlement freeze and [Palestinian Authority head Mahmoud Abbas] Abu Mazen wants to meet [Prime Minister Benjamin] Netanyahu without any preconditions,” Friedman said in an interview published on Wednesday.He spoke in advance of US President Donald Trump’s May 22-23 visit to Jerusalem and Bethlehem.During his trip, Trump won’t unveil a specific “diplomatic plan” or a “road map,” Friedman said.
David Friedman sworn in as US ambassador to Israel (credit: US Embassy Tel Aviv Press)
"The President has clarified that to start with, he wants to see the parties sitting together and talking without preconditions, with the hope that this will lead to peace,” Friedman added.“The US won’t dictate how you should live together, that is someone you will have to decide on our own,” stated Washington's new envoy to Israel.Meanwhile, on Tuesday night, Netanyahu and Trump held a 20 minute phone call about the American leader's upcoming visit to Israel and the Palestinian territories. The Palestinian insistence for the last eight years that Israel must halt all settlement activity and Jewish building in east Jerusalem was one of the core stumbling blocs to direct talks.Israel has rejected that demand, calling instead for negotiations without pre-conditions.Friedman pointed out that Israel did impose a 10-month moratorium on settler housing starts in 2009 and 2010, when former US president Barack Obama first entered office.That freeze did not lead to negotiations, Friedman pointed out.Trump’s policy is diametrically opposite from Obama’s on this issue, asserted Friedman, adding that Trump does not believe that settlements are a stumbling bloc to peace.Trump is a skilled negotiator who can help both parties and reach an agreement, said Friedman. He is pragmatic, where his predecessors were more theoretical, Friedman added.“It does not mean he can produce magic, but he can lead the parties to find common ground, at least in the first stage,” Friedman said.The US ambassador added that unlike his predecessors, who remained within the Green Line, he plans to cross over it, including visits to West Bank settlements.