Frustration and sadness from residents, ideological fervor from activists

At times, it seemed almost like a social happening for the many youths, who came from Ofra itself and beyond to protest and be with their friends. 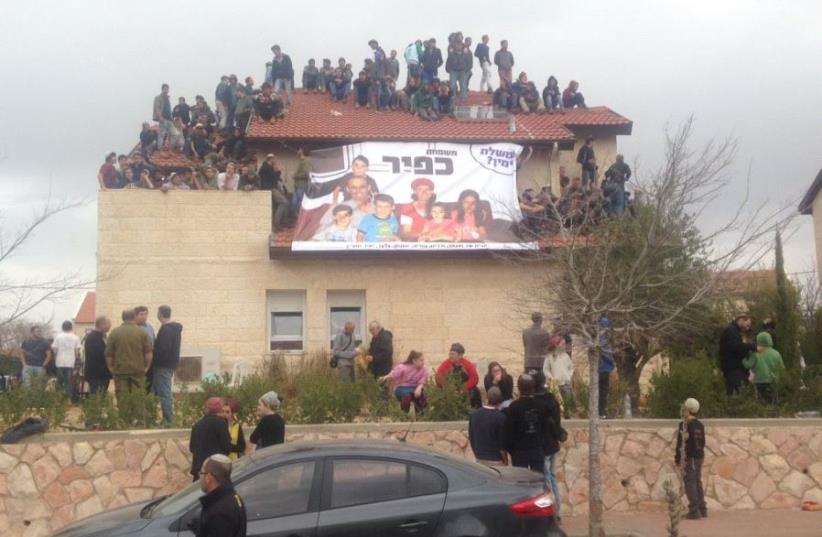 Ofra Youth gather on roof of home slated for demolition
(photo credit: JEREMY SHARON)
Advertisement
“This is a fight for our heart, for the Land of Israel,” declared one of the protesters holed up in the last house of the nine in Ofra that were evacuated on Tuesday.Emotions were certainly running high among the protesters and home owners in the settlement, but they were also mixed.Several of the home owners expressed a sense of frustration toward the government and resentment toward the High Court of Justice, but at the same time appeared resigned to their fate, which they knew had been coming for some time.The emotions of the many hundreds of youths who came to protest the evictions were quite different, with many expressing a nationalist and religious ardor for defending the right to live anywhere in the historic Land of Israel, as well as anger at the pending destruction of the homes in Ofra.For the most part, the atmosphere was not violent, and most protesters said they would not actively fight the police when evacuated but would not leave voluntarily either.At times, it seemed almost like a social happening for the many youths, who came from Ofra itself and beyond to protest and be with their friends.At the same time, it was almost something of a vital experience: to protest a settlement evacuation and participate in a kind of social activism, to refuse to leave and be carried out by the police, almost a formative experience.Indeed, that is certainly how the many rabbis perceived the demonstration, and they sought to inculcate this notion into the minds of the protesters.Rabbi Shmuel Eliyahu, one of the most senior national-religious rabbis, addressed some of the youths in one of the houses slated for destruction, telling them that they should take strength from their protest in Ofra and go on to build more settlements throughout Judea and Samaria.The emotions of the home owners in the midst of the evictions were not on this same ideological plain, however.Nati Peery, one of the home owners, was visibly shaken and emotional over the events transpiring around him. Peery was a combatant in Gaza during Operation Protective Edge in 2014, during which he was injured. He still suffers from post traumatic stress disorder, something he said was creating greater anxiety for him during the evacuation.“It’s very hard for me, they’re destroying houses for no reason at all, no one’s going to live here or be able to work the fields because it’s in the middle of Ofra, and there are houses all around them,” Peery told The Jerusalem Post.This sentiment was widely voiced by those being evicted from their homes, who argued that since the land is in the middle of a built-up neighborhood, albeit close to the current boundaries of the settlement, it is all but certain that no Palestinian landowners will ever be able to make use of the land.“It’s very emotional, I have a history of PTSD from my injury in Gaza, so there’s a lot of commotion inside of me, all of this is getting mixed up inside me, it’s altogether,” said Peery.Peery, his wife and their four children moved out of their home two weeks ago and have been living in a prefabricated home in Ofra, but returned to the site with their two eldest children to protest the eviction.Hananel Kfir, whose hosted more than a hundred activists at his home on Monday night, expressed a deep sense of frustration with the government, which, despite its right-wing credentials, could not or did not prevent the destruction of his home.“I feel incredibly frustrated, frustrated with the legal system and frustrated with the political system that is failing to actually take control in this state,” he said. “Time after time, decisions are made by the legal system in an undemocratic way, when they should be made by the political system,” he continued, expressing an antipathy for the High Court which was broadly held by the home owners, activists and rabbis.One decision which particularly rankled was a rejection by the court for a delay in the destruction of the houses until their new homes in the settlement are built, so that they would only have to move once.“The High Court, with malice and iniquity, didn’t agree to postpone the destruction, so we’ll have go to an interim place until our new homes are built,” Kfir said.Tamar Eldad, another home owner, was also highly critical of the High Court, accusing it of seeking to “put settlers in their place” and demonstrate that it is in control.“We think that there is a desire to ‘educate’ us, to educate the settlers, something I didn’t feel until the our last petitions were rejected,” she said.Despite the pending destruction, Kfir was placid and accepting of the situation, but insisted that the protest against the eviction was just “natural” and, most importantly, designed to create “reverberations in the media” so as to exact a price from the government and make it harder for the government to carry out such orders in the future.Eldad echoed his thoughts.“We are sad and are in pain, but hope that this is the last time that houses are destroyed in Judea and Samaria, and if we can earn this at the expense of these nine houses, then ‘it will be enough,’” she said, referencing to the Settlements Arrangements Law passed this month that is designed to prevent such evacuations from occurring.