A Palestinian pathologist, who examined Sharif's body, will testify next week at the upcoming hearing against Azaria, slated for Wednesday 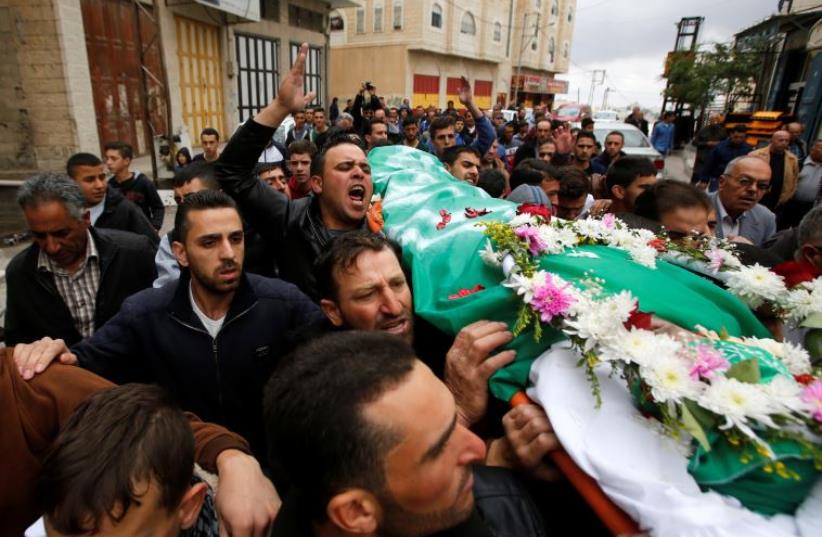 Palestinians hold the funeral for a man shot dead by Israeli forces after an attack on a soldier on March 24 in the West Bank city of Hebron
(photo credit: REUTERS)
Advertisement
The funeral for a Palestinian who attacked a soldier in Hebron two months ago and then was shot and killed under controversial circumstances, was held in the city on Saturday Abdel Fattah al-Sharif’s body was released to his family on Friday. Mourners carried his wrapped body through the streets chanting calls for revenge.Sharif was one of two terrorists who stabbed and wounded a soldier in Hebron on March 24; soldiers then killed both attackers.Sgt. Elor Azaria was detained after being shown on a bystander’s video firing once into the head of Sharif as he lay supine, shortly after being shot by other soldiers.Azaria was indicted last month on charges of manslaughter and inappropriate military conduct.Prosecutors, citing the testimony by the soldier’s comrades and his apparently calm disposition, say he carried out an illegal shooting motivated by revenge.Defense lawyers say the soldier took action, fearing the Palestinian had a hidden bomb.After learning that the Sharif’s remains would be returned to his family, the Azaria family released a statement saying the move was “disturbing” and reflected poorly on the decision-making within the government.“It is disturbing and sad to see the terrorist who came to kill our soldiers get a mass funeral where they call for revenge against Israel and threaten to kill our son,” the statement said.“While he [Sharif] will be wrapped in a Hamas flag and be hailed as a hero, our Elor will still be in administrative detention, charged with manslaughter after being attacked and vilified by officials within the system,” the statement continued.On Wednesday, Public Security Minister Gilad Erdan ordered a halt to the return of bodies of Palestinians killed while carrying out attacks, following a funeral in east Jerusalem on Monday night that he said violated understandings reached between police and the families of the terrorists.In a Facebook post on Tuesday, Erdan wrote, “I just saw the outrageous photos from the funeral overnight in east Jerusalem which violated the police stipulations given to the family of the terrorist, who held a funeral with a large number of attendees and calls for violence and support for terrorism.”He continued, “The families of terrorists lied to the High Court when they vowed to adhere to the police stipulations, and it’s a shame that the High Court believed them, and exerted pressure on the police to return the bodies in time for Ramadan.”