Gaza deters Israel, not the other way around, Haniyeh says

"If there won't be quiet in Israel, Gaza will pay a very heavy price," Ya'alon warns. 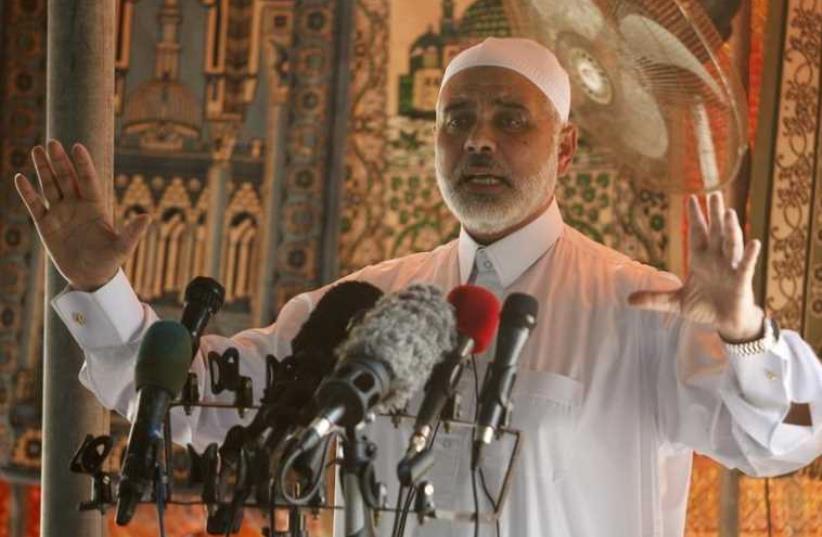 Senior Hamas leader Ismail Haniyeh delivers a speech during Friday prayers at a makeshift tent erected near the remains of a mosque in Gaza City
(photo credit: REUTERS)
Advertisement
Ismail Haniyeh, Hamas’ deputy political bureau chief in Gaza, said on Wednesday that the threats of "the occupation" don't scare Gaza, and that the path to liberate Jerusalem and Palestine goes through the coastal enclave. Haniyeh was speaking in a ceremony in Gaza with Hamas officials following the Israeli retaliation for a rocket fired on Israel on Tuesday.
After firing rockets at Israel, explosions in Gaza from IDF strike
"Israel's theory of deterrence does not affect Gaza. Gaza can deter Israel, however, as one million Israelis panicked and took to shelters over one stray rocket," he added.   Earlier on Wednesday, Prime Minister Benjamin Netanyahu said that the IDF responded immediately to the rocket fire, in line with the government's policy.
Netanyahu warns Hamas on Gaza rockets
“We will do everything needed to preserve the quiet attained through Operation Protective Edge,” he said, referring to last summer's operation in Gaza. Defense Minister Moshe Ya'alon said on Wednesday that Israel has no intention of ignoring rocket fire on its citizens.  "If there won't be quiet in Israel, Gaza will pay a very heavy price, which will cause all who plan to challenge us to regret their actions," Ya'alon said. "Hamas is advised to restrain any attempt to fire rockets at Israel or provoke it, otherwise we will be forced to act with greater power. I would not advise anyone to test us," he warned."We see Hamas as being responsible for what happens in the territory of Gaza, and we will not tolerate any threat to residents of the South," he said.Khaled Abu Toameh and Herb Keinon contributed to this report.